The Left and Nigeria’s 2019 election 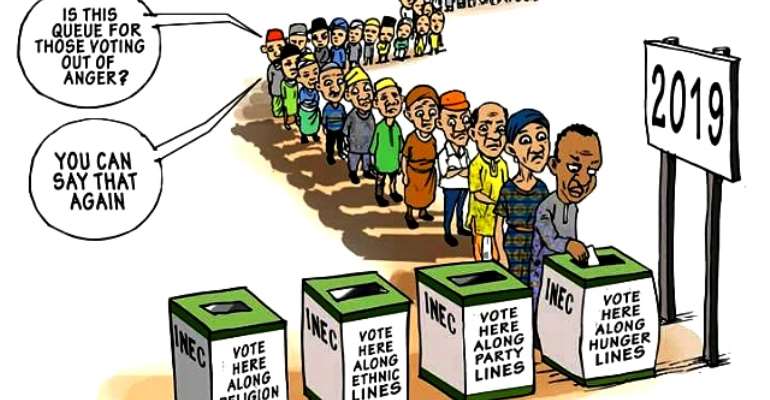 In late 1978, or early 1979, Chief Obafemi Awolowo, one of Nigeria’s frontline political leaders and the leader of the newly-proclaimed Unity Party of Nigeria (UPN), came to Calabar in continuation of his presidential campaign tour. The ban on political activities imposed after the military coup of January 15, 1966, had been lifted four months earlier and Chief Awolowo had announced the formation of the party the same day the ban was lifted. Through the agency of Odia Ofeimun, Awolowo’s private secretary, two young members of the Calabar Group of Socialists (CGS)—Bassey Ekpo Bassey and myself—met the visiting presidential candidate of UPN as he was having his dinner (of bread and Lucozade drink) late at night, at about 1.00 am.

After the pleasantries, we told Chief Awolowo that we liked his party’s four cardinal programmes (free education at all levels NOW; integrated rural development; free medical care; and full employment of all labours) and would like to campaign for him freely, that is, without compensation—but would not like to be card-carrying members of his party. After appreciating our choice, Chief Awolowo insisted that we should formally and openly join the party. We thanked him for granting us audience, withdrew from his presence and left the venue as quietly—or rather, as secretly—as we came.

My review of this story—and indeed the rest of this piece—will be built around four questions: Why did we make this trip? Why was it secret, or rather, doubly secret? What was our feeling about Awolowo’s response to our request? And what do I feel about the event now, more than 39 years later?

To answer these questions, we may have to move 17 months back from December 1978, that is, back to July 1977. Between the end of that month and the beginning of the following month, August, 1977, Nigerian socialists held a conference at the Ahmadu Bello University, Zaria. That conference, with the name All-Nigeria Socialist Conference, is a landmark in the history of the Nigerian Left.

All shades of radical consciousness—from social democracy to Bakuninist anarchism—were present. The list of invited participants became useless, because the majority were uninvited. Fela Anikulapo-Kuti came with the full contingent of his band and dancers. They insisted on sitting on the floor! At the end of the four-day riotous conference, a particular decision came out as a consensus: Whenever General Obasanjo and his military gang lifted the ban on open political activities, socialists should form a single party to confront the exploiters and oppressors.

With the benefit of hindsight, it may now be seen that such a single party—accommodating all Leftwing tendencies—could only be a “mass” socialist party, near to social democracy, and not a “cadre” or “vanguard” socialist party. But this was not spelt out at the conference, nor could the difference have been appreciated by most of the participants who were just angry, but politically progressive young Nigerians.

I am now convinced that older comrades like Eskor Toyo, S. G. Ikoku, Ola Oni, Ikenna Nzimiro, Tunyi Otegbeye, Wahab Goodluck, Dapo Fatogun, Baba Omojola, etc, must have known that major differences would emerge at the point of execution of this landmark decision. And so, it happened! By the time Bassey and I met Chief Awolowo in Calabar 17 months later, not less than five Left parties had emerged—each claiming to a realization of the Zaria decision. But that was not all.

Leftists who went into the two leading progressive mainstream parties: the Unity Party of Nigeria (UPN) and the People’s Redemption Party (PRP) claimed to have gone there to realize the Zaria Conference mandate. Even comrades who went into the leading conservative parties—the National Party of Nigeria (NPN), the Nigerian People’s Party (NPP) and the Great Nigeria People’s Party (GNPP)—claimed to be the legitimate heirs of the Zaria Consensus since they went there to take over the parties and transform them! The comrades who were “left behind”, that is, those that did not form or had not formed parties or had formed parties and quickly came out—seeing that it was a joke—were very angry.

This last group included Bassey and I. And we were angrier because General Obasanjo had just dismissed us and some other Leftists from our jobs over “Ali must go” protests. We did not accept that we should just go and “siddon look” as vampires and predators were preparing to take over power from the military after 13 years. We looked at the situation and decided to meet with Chief Obafemi Awolowo. This answers the first of the four questions: Why did we make the trip to meet with Chief Awolowo?

Now to the second question: Why was the trip secret and doubly secret? It was secret because we did not want the meeting to be known to the public, since we did not have sufficient time to consider the implications and consequences. And the trip was doubly secret because it was not approved either by the Nigerian Left in general or the Calabar Group of Socialists in particular.

On the face of it, the trip, whether “successful” or not, would have been considered by the two entities not only as undisciplined, but also as dangerously “voluntaristic” and “adventuristic”, if not “counter-revolutionary”. We were, however, ready to justify it on highly revolutionary grounds before the Left—had it leaked. But the trip was unsuccessful and did not leak. The matter was therefore buried.

The third question: What was our immediate reaction to Chief Awolowo’s response? We were, of course, very disappointed. But later, over beer and cigarettes, we rationalized that, perhaps, we were lucky! I thought of the possible reactions of Comrades Bene, Biodun Jeyifo (BJ) and Eskor Toyo in particular.

The answer to the fourth and final question—what I now think of the 1978 visit to Chief Awolowo—is the “meat” of this piece. That answer is this: The thing that Bassey and I did that night in Calabar should be taken as a prototype of what the Left should openly begin to do now. But it should be done collectively (as against individually) and consciously and deliberately (as against idealistically and romantically). It should not be a “free gift” like what Bassey and I offered 40 years ago. It should rather be a hard-political bargain of mutual benefits.

The offer to the other side could begin like this: “Although our destinations are not the same, it appears we can pass through the same routes for a considerable distance. Let us then move together and hope that before we get to the ‘parting of ways’ we would have convinced you or you would have convinced us or a mutually–acceptable third destination would have appeared. But in the meantime, the masses would have achieved irreversible successes and victories.”

Finally, this bargain, which may result in an alliance, should not exhaust the strategy or programme of the Left. There should be ancillary and “fall back” positions—just as the other side will have theirs.

Our Biggest Issue Is Jobs - Akufo-Addo
40 minutes ago

Thank You For Backing My Innocence’ – ACP Agordzo
40 minutes ago