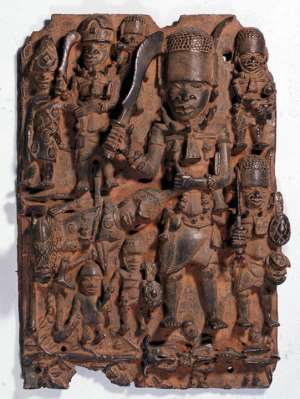 ' Hamburg was the place where the first Benin bronzes arrived towards the end of the 19th century and Hamburg could again play a leading role by allowing the first bronzes to leave here on the way back to their original country. This would be a signal.' - Sabine Schulze

This exhibition is part of a series dealing with looted art in the collections of the Museum für Kunst und Gewerbe (MKG) which has been involved in provenance research. The MKG examined the history of the origin of the three Benin bronzes it possesses and the role of its founding director, Justus Brinckmann who procured them for the museum.

Opened on 15 February 2018, at the end of the exhibition, the three bronzes would be transferred to the Museum für Völkerkunde, Hamburg which has a greater number of Benin bronzes and can present them in a more appropriate way and give them the context they deserve.

Justus Brinckmann, was the first museum director in Germany to have acquired Benin bronzes which he appreciated very much for their aesthetic qualities and the fine craftmanship they displayed. Being in Hamburg, an important habour for colonial goods, Brinckmann was able to secure several Benin artefacts but could not keep them for lack of funds and had to trade some to obtain money for the purchase of other pieces. A large part of the 50 bronzes Brinckmann had in his hands went to the Völkerkunde Museum, Hamburg, and only three pieces remained in the Museum for Arts and Crafts, Hamburg.

Brinckmann contributed to the appreciation and knowledge of the Benin bronzes in Europe through publications and lectures and indeed, it was during one of his presentations that Felix von Luschan saw the Benin bronzes. Luschan secured later many Benin artefacts, some 580 pieces, for his museum, Völkerkunde Museum, Berlin, and published his famous masterwork, Die Altertümer von Benin,1919, in three volumes.

Although the authors mentioned the immediate cause that led to the British invasion of Benin in 1897, namely the killing of members of a British delegation, allegedly going to discuss trade matters with Oba Ovonramwen. The king advised that they should postpone the visit since at the proposed time, he would be involved in a traditional celebration during which time he was not allowed to be seen by any foreigner. The so-called delegation went and eight members of the delegation of nine were killed. Britain swiftly retaliated. The authors seem to have accepted the narrative that is favourable to the British and repeated by many writers.

The full picture however is that the delegation was accompanied by 240 African soldiers disguised as carriers who had guns and ammunition in their boxes. More importantly, the British had long decided that Oba Ovonramwen had to be removed and the aim of this pre-emptive military force was to surprise the Oba during the ritual celebration and replace him with a more pliable king but were themselves surprised. Since when do we visit a king if he suggests the postponement of the visit? And did a delegation of nine require 240 carriers? The presence of the 240 soldiers or carriers disappears from many accounts and thus reinforces British stories that Benin was a particularly blood-thirsty monarchy that even killed persons who went there to discuss trade.

One remarkable feature of this book is the frankness and directness with which the contributors approached their topics. We had the impression they seriously wanted readers to understand clearly the importance of the Benin artefacts, their role in their original society and the importance they assumed after their arrival in Europe. Right from the beginning of the book, Sabine Schulze declares in the Foreword that in our times, it is beyond question that the Benin bronzes are looted art. She then recounts briefly the British invasion of Benin in 1897, the looting of the bronzes and the burning of Benin City. Most of the loot art passed through Hamburg as gateway to Europe. According to Schulze, the first bronzes came to Hamburg towards the end of 19th century from Benin. Hamburg could take a leading role in the return of the bronzes to the country of origin. This is a remarkable thought from a Westerner, bearing in mind that hardly any Western scholar envisages the possibility of returning Benin or other looted African artefacts. Of course, we must distinguish individual opinions from institutional positions.

One may compare the voices and impressions coming out of Hamburg with what appears to be the current thought of those around the Humboldt Forum, now in control of the 580 Benin artefacts or what remains thereof, in the Ethnologisches Museum. The President of the Prussian Cultural Heritage Foundation, Parzinger, is clearly not thinking of sending any Benin or other African artefacts back. He speaks about provenance research and emphasizes that it takes time and money. He would not agree with the view that we do not have to possess physically all that we value and that museums must learn in future to separate from objects they appreciate.

It is also interesting to note that whilst from Berlin, one gets the impression that the Humboldt Forum scholars are busy casting a mantle of selective ignorance about the Benin and other African artefacts there, in Hamburg we get concrete knowledge about the handling of Benin artefacts. The scholars in Hamburg worked on original receipts, letters and other documents revealing the relations between Justus Brinckmann and those who had artefacts to sell. Could it be that Felix von Luschan in Berlin, was less careful and meticulous than Brinckmann and did not leave any notices, documents, or letters from which one can gain some knowledge and information about the Benin artefacts he secured for the Völkerkunde Museum hundred and twenty years ago? We would be surprised if the famous author did not leave valuable notes of what he secured for the museum. (2)

The authors of this book agree that before the invasion of Benin in 1897, there were hardly any Benin artefacts in Europe. An opinion also shared by Luschan. This contrasts with the view of Parzinger, President of the Prussian Cultural Heritage Foundation, who has repeatedly stated that one should not regard the Benin bronzes as all looted since there was a busy trade between Benin and Europe and some of these artefacts could have been bought on open market before 1897. His view contradicts the opinion of Luschan who secured many Benin artefacts for the Ethnologisches Museum that are being transferred to the Humboldt Forum. (3)

The conclusion to the provenance research of the three Benin artefacts is somewhat paradoxical: the artefacts are to be transferred to the Völkerkunde Museum in Hamburg that now holds some 196 Benin artefacts. This museum has not indicated any intention to return artefacts to Benin. In the case of provenance research into Nazi-looted property, once research has established that the objects were looted from the property of X, attempts are made to find the successors of X to whom the property will be returned. So why not return the Benin bronzes to the successors of Oba Ovonramwen from whose palace they were looted in 1897? Unlike searching for successors to victims of Nazi-Loot, it is not very difficult to find the rightful heirs to victims of the British invasion of Benin: the heirs of Oba Ovonramwen are alive in Benin City and have been claiming the return of their artefacts for decades.

The decision to send the three looted Benin bronzes to the Völkerkunde Museum in Hamburg is remarkable in another respect. Supposing after provenance research it was established that a suspected Nazi loot in fact belonged to Mr. G, a Hamburg businessman whose property was confiscated and auctioned by the Nazis in 1934 and now displayed in a public library in Hamburg. Supposing that the Hamburg Senate decided that the loot was to be handed to Gallery X, that already has many Nazi looted artefacts. What would be the general reaction of the public, scholars, and journalists?

Could it be that in final analysis, there is no real difference between the approach of the institution in Hamburg from that of the Humboldt Forum as far as regards restitution? None of the institutions appears at the moment to be willing to return any African artefacts, not even after the bold decision of the French President Macron to return African artefacts in French museums. (4)

It would be highly enlightening if other institutions would also examine their holdings in the clear and honest way that the Museum fur Kunst and Gewerbe, Hamburg, has done. But the need for provenance research should not become a means for prolonging the exile and detention of the Benin artefacts. Above all, they should not adopt Parzinger's mantra: we need provenance research, this requires money, and takes time. (5)

German institutions have been holding Benin artefacts for than 120 years and suddenly we are being told they lack precise information about Benin artefacts. There is probably no other African culture, with the possible exception of Egyptian culture, about which so much has been written as about Benin culture. (6)

The demand of our age is restitution of looted artefacts and not knowledge about looted artefacts. Germany should not be still researching about artefacts whilst the French are preparing to return them to their rightful owners.

The age of imperialism and oppressive colonialism is long gone and most Europeans, especially the youth, have understood the relationship between economic exploitation and poverty. Will German museums and institutions be the last to acknowledge this change and stop advancing today justifications of by-gone decades to hold on to ill-gotten artefacts of other peoples? To condemn colonialism and still hold on to cultural objects of others, violently wrenched by colonialist troops, is the highest form of hypocrisy.

Hamburg, a city that profited a lot from slavery and colonialism, should at least be willing to return this tiny part of the stolen African resources.

As a city that hosts international bodies such as the International Tribunal for the Law of the Sea, the Free and Hanseatic City must decide whether it is right and proper to be seen as holding illegal and looted African artefacts, contrary to various resolutions of UNESCO/United Nations Assembly calling since 1972 for the return of artefacts to their countries of origin, a defiance that constitutes a permanent violation of the human rights of Africans to a free and unhindered cultural development.

Hamburg builds its Elbphilharmonie for further cultural development but prevents the people of Benin, Nigeria, from using their ancestral artefacts detained in Hamburg.

'When Nigeria gained independence and could not exhibit a single original Benin object in the new museum in Benin City, but only photos, Nigeria turned to Western museums with the request at least to lend one of the masks. The request was without success. Nigeria had in fact to buy some masks and bronzes for horrendous sums at auctions'

3. Christine Stelzig, Afrika am Museum für Völkerkunde zu Berlin 1873-1919, Centaurus Verlag, Herbolzheim 2004, p. 368. Parzinger's argument that before 1897 there were Benin artefacts on the open market has recently been adopted by an auction house, but this led to revelation that in fact the Benin objects in question, eleven altogether, had been sold by the Völkerkunde Museum, Berlin, to the owner of the estate in question. Such sales and transfers must explain the discrepancies in the number of Benin artefacts in Berlin stated at different times. See K. Opoku, Benin To Berlin Ethnologisches Museum: Are Benin Bronzes Made In Berlin...,note 29. https://www.modernghana.com/.../benin-to-berlin-ethnologisches..

4. K. Opoku, 'Macron Promises to Return African Artefacts in French Museums: A New Era in African-European Relationships or a Mirage?'