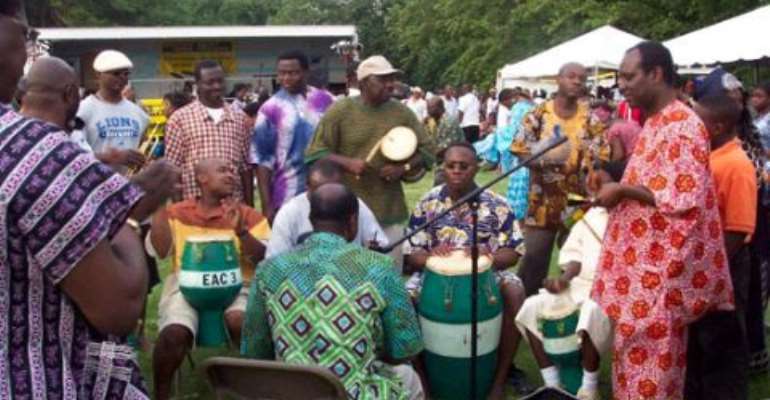 Ghana Fest has over the years become a great annual event that depicts not only Ghana's traditional thanksgiving celebrations, and a cultural exposition of great significance that showcases the diverse and rich Ghanaian culture to the American public and the world at-large, but also as a day for reaffirming our national unity and brotherhood.

Eighteen years ago when Ghana Fest actually started, the pioneers of the event had no idea that it would grow into the magnitude of becoming one of the greatest cultural and ethnic festivals celebrated in the City of Chicago and in North America. Indeed GhanaFest has become the most spectacular cultural African celebration in the Diaspora.

It all started in the summer of 1987, when the Ghana-Chicago Club (GCC), a socio-economic group in collaboration with some leaders and elders of the Ga-Dangme community in Chicago, organized the celebration of the august Ga-Dangme Homowo Festival of thanksgiving, at Jackson Park, Chicago. The celebration attracted most Ga-Dangmes as well as a cross-section of the Ghanaian community.

The newly crowned Ga Mantse of Chicago, Nii Lante Okunka Blebodzan I, the Queen Mother Naa Aku Shika I and their entourage sat in state amid some pomp and pageantry to welcome guests and celebrants.

The park resounded with traditional drumming as the Ga Mantse sprinkled the traditional Homowo food Kpokpoi to the ancestors; the highlight of the celebration.

This was followed by merrymaking, dancing, camaraderie and indeed some nostalgia.

Food and drinks were free and plentiful in the Ga Homowo spirit and tradition..

The event was so beautiful and so successful it instantly brought Ghana and African culture to the South side of Chicago in a way that inspired the special African-American guests, to urge the festival organizers to apply to the city of Chicago's neighborhood festivals program for funding and support for future celebrations.

Led by then Ghana National Council's Secretary-General, the late Rev. Kweku Lartey, the GCC / GaDangme coalition filed papers with the City of Chicago for support, which was subsequently granted.

In 1988, the city provided funding, tents, stages, toilets, park space etc. for that year's Homowo celebration. The GaDangme community provided free food and drinks.Mayor Richard Daley was in attendance. The crowd was large and the celebration was memorable. A huge roar went up when the Ga Mantse's entourage made its entrance amid the throbbing traditional drumming. Even a downpour of rain that afternoon could not dampen the spirits of Ghanaians.

In 1989, the GCC led coalition after negotiations with the Okuapeman Association, agreed to merge the Homowo celebration with Odwira festival into a “Ghanaian Durbar”

Indeed the name, “Homowo-Odwira Festival” was considered for the event, but not adopted. Again the crowds grew larger, mostly because of the free food and drinks!! The festival began to gain recognition, drawing distinguished guests as well as Ghanaians from near and far. Other African communities notably, Nigerian, Liberian, Ethiopian and South African began to participate and the city of Chicago continued with its financial and logistical support.

In 1990, after a summit of all Ghanaian organizations in Chicago under the auspices of the GNC, it was decided to expand the Homowo-Odwira theme into an all-Ghanaian celebration with the name Ghana Festival (coined by yours truly!).But the basic tenets of Thanksgiving and cultural exposition would be strictly maintained. Commercialism would be kept to a minimum. It was agreed that the GNC should be entrusted with the organization and promotion of the Festival.

There have been many ups and downs in the life of Ghana Fest over the years. But the trend has always been to make unqualified progress and to broaden our horizons. Today we all see the Fest as a true taste and essence of Ghana and as the most rallying point for unity among Ghanaians. This is the legacy we can proudly leave for our children and their children.