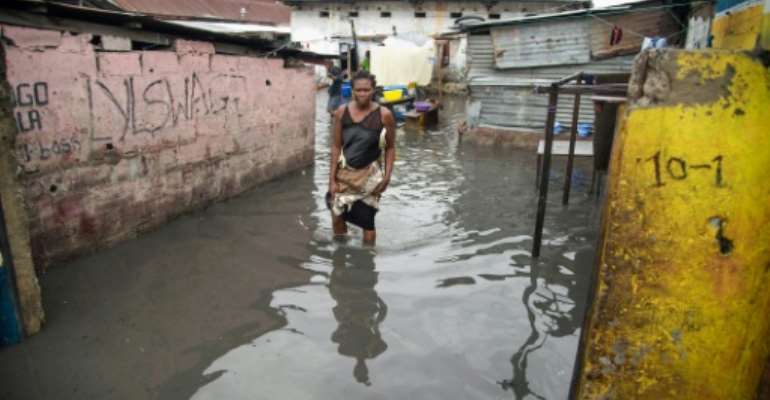 A Congolese woman wades down a Kinshasa street after flooding in February 2017. By Junior KANNAH (AFP/File)

The World Health Organization Monday said there was a high risk of a cholera epidemic after flooding in Kinshasa, the teeming and ramshackle capital of the Democratic Republic of Congo.

"In a big city like Kinshasa, which has between 10 and 12 million inhabitants, the rains and the floods make the risk of a spread of this epidemic very high," the WHO's Africa director Matshidiso R. Moeti said at a press briefing.

The highly infectious disease, which thrives in conditions of poor sanitation and contaminated water or food, has spread to 21 of the 35 health zones into which Kinshasa is divided, and "the situation is serious," Ramazani said.

The WHO announced that it has delivered 11 tonnes of medical supplies to the Congolese authorities, including antibiotics and products to treat dehydration.

The epicentre of the outbreak is Camp Luka, a poor neighbourhood in central Kinshasa, marked by overcrowding and the lack of both toilets and potable water.

Three-quarters of homes in Kinshasa are slums which have no access to sanitation or electricity, Corneille Kanene, former head of UN-Habitat, said last year.

The charity Medecins Sans Frontieres (MSF - Doctors Without Borders) last week set up one of its two treatment centres in Camp Luka.

Flooding in Kinshasa was caused by torrential rain during the night of January 3, which was followed by a second bout on January 7, claiming 48 lives, according to the authorities.

Beyond the capital, the latest cholera outbreak has affected 23 of the 26 provinces in the vast central African country since 2017, with "almost 50,000 cases and around 1,000 deaths", MSF estimates.

Such figures make it the worst outbreak in DR Congo since 1994.