Can Ghana ever Free Herself from Political Incompetence, Corruptionand Dangers of Weak Institutions? 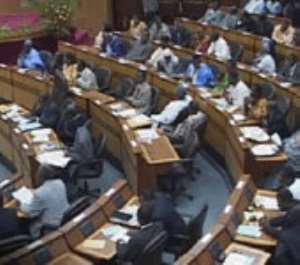 This write-up is premised on the inconclusive and obviously denigrating verdict exonerating the Finance Minister, Hon. Ken Ofori Atta, from blame of conflict of interest in the US$ 2.25 billon bonds and other matters of political orientation. The Commission for Human Rights and Administrative Justice (CHRAJ) after conduction of intensive investigations into the conduct of the Finance Minister as regards the bonds have declared him blameless, although he did not follow the appropriate procedures, CHRAJ confirms.

Their conflicting verdict is more than enough to justify not only the weakness of CHRAJ as a credible institution to rely on to help Ghana but also, its total irrelevance. How can one be justified of their actions if they failed to follow laid down statutory processes to culminate in public condemnation?

Failure to follow generally acceptable and agreed procedures in the executions of one’s duties, but to use their own devised processes for whatever reason in contravention of laid down rules, automatically makes the individual liable to committal of gross misconduct and/or crime.

What could be the Minister’s genuine explanation for not following known and acceptable procedures but to use his own methods? We had better call a spade a spade than to shield people from blame and prosecution for political affiliations and convenience or mere cowardice. These attitudes of ours have given rise to, and propped, corruption, in Ghana to the detriment of the majority of the people and the Black race that is treated with scorn by our White contemporaries.

CHRAJ in my current observation is not fit for purpose as an institution. We have a President who is incorruptible and has vowed to curtail, if not uproot, corruption, the bane of the Ghana’s socio-economic development, from Ghana. How can CHRAJ’s attitude as exhibited in this bonds saga be of any help to the President achieving his promises made to Ghanaians during his 2016 electioneering campaign?

If the Finance Minister were to be in any of the Western Civilised countries’ governments, he would have resigned long ago to save himself his honour; to save his government and party their credibility and to save his nation from damage and mockery resulting from his untoward conduct if indeed he did not follow appropriate regulations.

I have read somewhere about the Attorney General, Mrs Gloria Akuffo, purportedly not quickening up enough or is sleeping on her job. Some media organisation claims to have written to her about some people still doing galamsey who are waiting to be prosecuted but she seems not to care much by her failure to respond to their petitions to her to ensure those culprits are prosecuted quickly.

Again, they claim the court sentences being given to some prosecuted galamsey culprits by the courts are so negligible to serve as any meaningful deterrence to others. This goes to tell, the fight against galamsey risks failing in the end. However, this illegal surface mining (galamsey) is devastating the nation’s water bodies, farmlands and polluting the air. No wonder the death rate among present day Ghanaians is astronomically high.

I hope our leaders are not yielding in to pressures from China to soften up on the fight against galamsey in which their nationals are masterminds and orchestrators. I hope again that our male Government Ministers and those in positions of power are not being induced by Chinese sexual offers as done during former President Mahama’s regime. Was one of his Ministers not recorded on video having sexual intercourse with a Chinese lady which video went viral on WhatsApp when posted by an unknown person?

The Attorney General by dragging her feet may not be helping His Excellency Nana Addo Dankwa Akufo-Addo in his determination to deliver on his promises to Ghanaians. He is already accused of cronyism by his political opponents and fair-minded Ghanaians for the simple fact of having plenty Akufos and Ofori Attas in higher positions. To them, they are all his family or extended family members. For his accusers, cronyism begets corruption and corruption begets all sorts of crimes.

Therefore, it is incumbent upon such appointees to prove the President’s accusers wrong by performing creditably well or else, you have let the President down and tarnished his envious credibility of incorruptibility forever.

Finally, there is that young Presidential staffer of 30 or 31 years old who by exhibition of youthful exuberance, has stupidly marred the President’s efforts to endear himself to the public in his appeal to the teeming unemployed youths to bear with him while he assiduously tries to sort things out for them. She is one Napaga Tia Sulemana, a mate of my extended family grandson (Coach) at the University.

This young girl who by merit or an act of cronyism has got such a lucrative job should bow down her head in shame for insulting her colleagues that are jobless but did queue up in scorching day of 7 December 2016, to elect the NPP to power to secure her the job she is doing now.

She must come out to apologise profusely or be sacked from her post. Her statement of, “Those of you who usually meet me at events and immediately want to submit your CV for employment, this nonsense should end in 2017” can cause political tsunami to NPP in any future elections. People will not spend their money, energy and wipe sweat to vote for such nincompoops to land in lucrative positions only to turn around to insult them.

I serve humanity and my nation but not a political party and persons hence being always forthright when expressing my views. Ghana will surely be rescued from institutional corruption often initiated by our politicians and people in positions of power in whom we entrust our lives and wellbeing.

It is my prayer that President Nana Akufo-Addo succeeds because it appears he has some wolves in lambskins surrounding him.

Lest I forget, could this be the general mind-set of the NPP or it is just an individual person’s view? When many a Ghanaian was expressing the wish for the President to appoint former Attorney General Martin Amidu for the position of the Special Prosecutor, a certain individual said no, the President shouldn’t. When I question to know why? He said, he is an NDC man and he will come to selectively arrest and prosecute NPP members.

I could not believe my eyes and ears when I heard this. Why should a member of NPP who knows he is clean fear if Mr Martin Amidu, a proven person who loves and puts Ghana above his personal and political party interests is appointed to that position? For the sake of Ghana and his godly convictions, he risked his job to become a pauper just to save Ghana from ruinous corruption being perpetrated or supported by his own NDC government.

One would have expected His Excellency the President to have brought him into his government unless he (Mr Amidu) himself did not want to help his country and people doing politics. These are the quality of people the President needed but he might have missed that golden opportunity for reasons only known to him and/or Mr Martin Amidu.

I rest my case.
Rockson Adofo