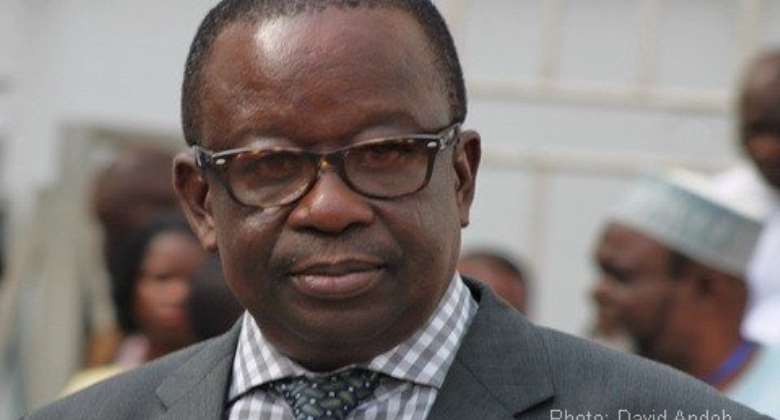 At a meeting between leadership of Parliament led by Speaker Prof. Mike Ocquaye and Mr Dapaah promised the House that the National Security Secretariat has eyes on the situation in Libya and is closely monitoring incidents there.

The Minority in Parliament at a media briefing last week called on government to treat as urgent a Libyan government report released earlier this month which claimed some Ghanaians were members of the terrorist group, Islamic State.

Minority Spokesperson on Foreign Affairs Samuel Okudzeto Ablakwa demanded that "government publicly reacts to this inquiry by the Libyan Attorney General’s Office due to its grave ramifications to Ghana’s image.”

In response, Chairman of the Foreign Affairs Committee of Parliament, Frank Annoh Dompreh, accused the minority of acting irresponsibly by going public with an unproven claim.

He said the Minority MPs should have acted more responsibly considering the sensitive nature of the matter, warning it could cause fear and panic.

But both sides of the house are now coming to a common ground on the issue after leadership grilled the minister on the issues raised in the report at a meeting last Friday.

They demanded firm assurances from the minister that government will take the report seriously and get to work on it to ensure the relationship between Ghana and its international partners including Libya is not harmed.

Mr. Kan Dapaah assured that efforts are ongoing to deal with details of the report, and added they are leaving no stone unturned in dealing with the concerns.

MPs on both the Majority and Minority sides agreed they will work at ensuring a bipartisan approach to the concerns so as not to avoid tension or embarrassment to Ghana.

Mr. Kan Dapaah assured the ministry will constantly update both majority and minority leadership on the issue as work progresses and will constantly consult them on every major step in dealing with it.

The minister encouraged MPs to desist from approaching the issue in ways that cause panic among the public.

He assured that close collaborations are ongoing with Libyan authorities over the concerns and government is also stepping up monitoring of internal security.

Both majority and minority leadership promised cooperation with the National Security apparatus on the issue.

Latest Photo Reports
Catch up with all the political quotes from our politicians.
Advertise here
More Politics
ModernGhana Links
Bagbin erred, budget hasn’t been rejected; it will ‘self-correct’ itself – Pius Hadzide
Hoot at anyone saying the 2022 'agyenkwa' budget has been rejected — Kojo Oppong Nkrumah
Bagbin engaged in illegality — Ekow Assafuah Vincent
Road tolls: Roads Minister will answer for causing financial loss to the state – Asiedu Nketia
2022 Budget: Show leadership and call your troops to stop the rhetoric and verbal assault– Adongo to Akufo-Addo
Your actions not helping Parliamentary work – Lawyer tells Majority leader
Five issues Minority wants revised in 2022 Budget
Let’s engage properly to get 2022 budget approved – Ricketts-Hagan
We will deal with you with the law – Annoh-Dompreh jabs Bagbin
TOP STORIES