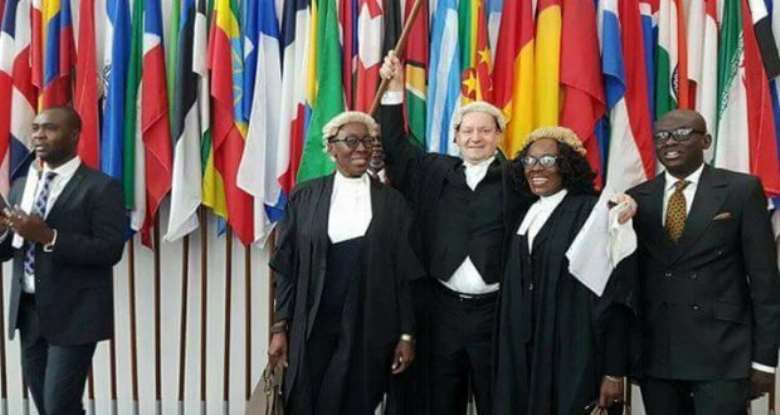 “You can speak with spiritual eloquence, pray in public, and maintain a holy appearance…. But it is your behaviour that will reveal your true character” – Steve Maraboli.

I'm usually bad at waiting. My mind keeps on buzzing with all manner of ideas as I ponder over the anticipated news. The anxiety manifests physically, making me develop insomnia and lose appetite. But I'm able to contain the shock of the news, no matter how bitter it is.

For the second time in four years, the country was made to sit on tenterhooks in anticipation of a court ruling. The first was on August 29, 2013, when we all waited anxiously for Justice William Atuguba to read the Supreme Court's ruling on the presidential petition case. The second was last Saturday, September 23, 2017, when the country experienced nervy moments as it waited for the ruling of the International Tribunal for the Law of the Sea (ITLOS) on the maritime dispute with Ivory Coast.

Unlike the former which was monitored by the whole country, the latter was monitored by only those of us who cared about the maritime dispute. Again, unlike Atuguba and his fellow judges, the ITLOS panel did not make us wait too long.

I was fortunate to have watched the ITLOS ruling with two lawyers. Our anxiety heightened when the presiding judge began by shooting down most of Ghana's arguments. But the anxiety began to ease when arguments from the other side were equally shot down.

Despite the complex nature of the ruling, our two lawyer friends were able to simplify the ruling for us to appreciate the perspective of the court. The long and short of it all was that Ghana's argument was melodious, while Ivory Coast's argument sounded discordant in the ears of the tribunal.

It would be an understatement to say the ruling is good news. The ruling is a blessing as the country was fortunate not to have lost even a single of the TEN oilfields to its neighbour. Indeed, the new map with the latest co-ordinates indicates that the country has rather made some gains.

Soon after the ruling, Zu-za started tickling itself and laughing. The party released a statement claiming it was the foresight of President Ogwanfunu to start the litigation that eventually led to the all-important victory at ITLOS. Well, I do not mind at all if all share in the glory. After all, it's a victory for the country.

But coming from those who, only few days ago, denied the founders of UGCC any credit in the country's independence struggle, one cannot fail to notice the hypocrisy. Are they now realizing that the pioneers of a cause deserve commendation when victory is finally attained?

Certainly, the ruling of the tribunal means more revenue from the oil sector for the country. This also translates into more cowries to finance the much-loved and highly-appreciated FREE SHS programme. With adequate financing and proper planning, the success of the FREE SHS programme is guaranteed. And we all know how that could help in determining the political fortunes of Zu-za, don't we?

Anyone across the political divide can claim to be excited. Political parties can engage in gimmickry and claim all the credit for the ITLOS victory. They can even organize unity walks and demonstrations in the name of ITLOS victory.

But they cannot deceive us. We cannot be fooled because we can distinguish between a genuine smile and a wry one. We will not allow ourselves to be fooled by smiles from those who inwardly wish the downfall of the incorruptible Nana Addo government.

You see, they will celebrate with us as we bask in the ITLOS victory. They will pretend to be happy and even swear to be more patriotic than anyone or any group in this country. But their behaviour has already revealed their true character to us.

We all saw how the Cockerel, the Coconut, the Sun and other opposition parties supported and applauded the government's FREE SHS programme. It is, therefore, an open secret that only one party is saddened by the introduction of the programme. If members of such a party come smiling and claiming to be happy at the country's victory at ITLOS, do you need anyone to convince you that it is a wry smile?