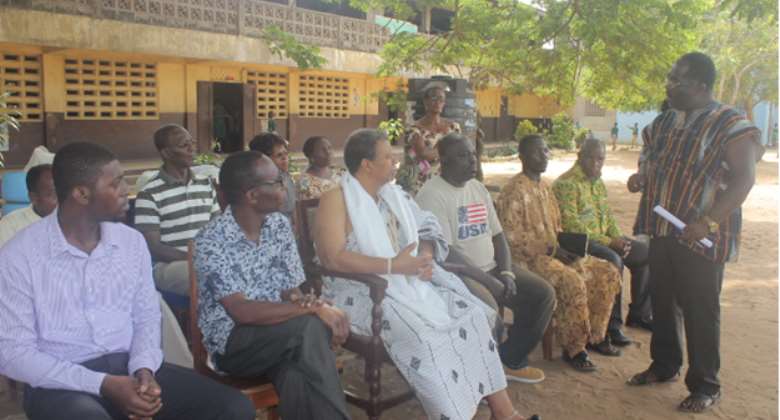 Abongobi Radio, a privately owned online broadcaster based in Switzerland with the support of it's listeners has donated some learning aids to pupils and staff of the AME Zion School at Korley Gonno in Accra.

The donation which came off over the weekend was made possible by the owner, Mr. Alex Adjei, a philanthropist, it's board members as well as some listeners and contributors to the station. Some of the items donated include computers, books, pens, pencils as well as some extra curricula and recreational materials like table tennis boards etc.

Nii Asuku, Mamprobi Mantse, resident in England and a board member of Abongobi Media Group Board spoke to the pupils advising them to be studious. He admonished them not to let the toils of their parents go down the drain rather be studious and hardworking. He pleaded with the pupils to make proper use of the items presented so that it meets the expectation for which it was presented.

Touching on the use of Ghanaian Languages as a means of tutelage in schools, the Mamorobi Mantse asked the pupils not to take the study of the Ga Language in school for granted.

The Ga Language is one of two languages spoken by the GaDangme people of Accra; the capital of Ghana. It has in recent times suffered in usage due to the metropolitan nature of the capital. There has been many attempts at reviving what is believed to be the during use of the Ga Language, even by indegenes. Abongobi Media, a wholely GaDangme oriented broadcaster is one of such entities which seeks only to revive the language of the GaDangme people as well as breed awareness of their culture.

Speaking at the presentation, a board member also present, Adjeleytse Tetteh another astute advocate for the GaDangme Language bemoaned how the Ga Language has to compete with other languages on its own soil. He said the practice of speaking to people in foreign languages supposing they can't speak our language is one element that is killing our language as well as destroying our customs and cultural fabric. He therefore urged parents, teachers and all stakeholders including students to desist from the practise.

The headmaster of the school, Rev. Kwaku Mensah was grateful to Abongobi Media, both home and abroad for constantly supporting the school and assured that the items will not suffer misuse.