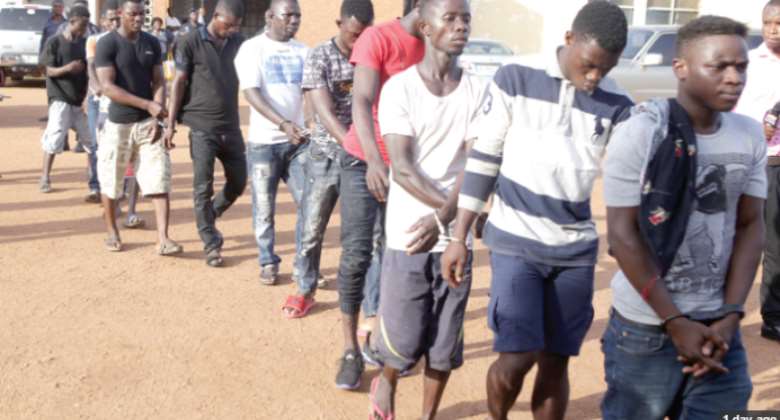 I have already condemned the lynching of Captain Maxwell Mahama. It hurts. My former school mate, Joseph Arhinsah, a fully fledged Winneba boy, has been in the army in the last several years. I am sure I would have thrown tantrums if he was the one killed in the manner that we have seen in the case of Captain Mahama. So I do understand the grieving rage of the bereaved family.

However, I am making a prediction here; nearly none of those 34 arrested and charged suspects in connection with the lynching of Captain Maxwell Mahama may be convicted of the offence. If we do not coerce them to implicate themselves in the case, many are likely to be acquitted and discharged, while others may come back to sue the state for wrongful arrests and detention.

I know I might be attacked for these predictions, but if you care to go back to some of my past publications, you would have noted that I had made a lot of implied predictions that have come through, including the death of Captain Mahama!

I have read a lot of social media comments from some very respectable individuals, some of whom have asked the army to descend heavily on the village, and wipe them completely off the surface of the earth. For such people, it is not their turn yet, it will soon be their turn, and they will know how difficult it is to be implied in a crime you have not committed.

While we have all ended condemning the lynching of Captain Mahama, let us also condemn the brutal manner the army treated the citizens of Denkyira-Boase. It is unlawful for the army to have gone back into the infamous village, to brutalize those there. We are not in a war situation. I saw some of the brutalities in pictures. We should condemn it, in the same manner that we have condemned the unlawful treatment meted out to the Captain.

I saw pictures of several individuals of the village whose faces and bodies have been brutally bruised, with blood stains spattered all over, with some visible pains demonstrating on their faces. Report has it that one of the suspects was found dead a distance away, suggesting that he might have died as a result of the reactionary brutalities.

We are condemning the death of Captain Mahama, but we are applauding the brutalities that the army is visiting on those we suspect to have been involved in the killing. So the army is engaging itself in the same act of lawlessness that we are all condemning, the same things that resulted in the death of Captain Mahama, the same lawless behavior that inspired the village people to kill the Captain, this is incongruence, not so?

Did we go after the Police, to kill them in return, when they mistakenly killed those fellow policemen? Have there been such retaliatory reprisals in those instances? Why did we not terrorize those in Bolgatanga when NPP’s Adams Mahama was acidized?

I have not forgotten about what happened recently in Kumasi where a civilian was mistakenly shocked by the police, when the victim was reported to have kept pleading that he was not an armed robber, yet the Police reportedly did what they did, in a manner that suggested that the young man was an armed robber. Did we expect a retaliatory gesture from the people of Kumasi, or that gentleman’s life was not that important?

Ya Na was an overlord of the entire Dagbon State. He was killed in such a bizarre manner. Did we send soldiers to Dagbon to torture all the inhabitants? Or is the late Mahama’s life more important than the late Ya Na’s? Do you think if Captain Mahama’s killing had happened in East Legon, do you think the army would have behaved the same way they have done? Or do you think we would have applauded the brutalities that followed?

This is exactly the point I tried to make last week. We are always so quick to descend on the poor, we are always quick to demonize those from underprivileged societies, the same under privileged we all profess to be working for. Captain Mahama’s grandfather was in the army. His father too was in the army, and he was in the army as well, he was former President John Mahama’s nephew, so he is more equal than the others, is that not the kinds of animal farm situations we are practicing?

Let us remember, that, the consequences of a guilty plea for the offenses these suspects have been charged with could be the ultimate, the death penalty.

It is likely that if any or all of those arrested suspects plead guilty, they may be sentenced to the full definition of the consequences of the law. It will therefore be an act of evil for anyone to, either directly or indirectly, force any of those citizens to plead guilty for an offense he did not commit.

I have heard many people saying any lawyer who will go and defend those arrested suspects is an evil lawyer. I wish I was a lawyer. I would have put all together as one and defended them. Defending anyone in this case does not necessarily mean they shall be freed. We must find a way of delivering justice that is fair, transparent, and deserving. Those who killed Captain Mahama must be punished. Those who did not kill Captain Mahama, but who have been arrested and charged, must be freed; nothing more, nothing less, that is justice.

I cannot see how all those arrested suspects could have been charged with murdering one person, all at the same time. How could we say that all those 34 or so individuals arrested, all of them killed Captain Mahama at the same time? If the autopsy report shows that the man died of stone pelting, then what becomes of those who did not pelt stones?

What about the bystanders who were either taking pictures or taking videos, the same pictures and videos that you are using for your evidence, to prosecuting your suspects? Are we not suppressing the voices of those who genuinely witnessed the events in order to secure evidence for the justice we are all seeking? Do we expect that next time ordinary civilians will assist in providing evidence for our justice delivery, when we are demonizing those who have done same?

We need to act responsibly. The state must intervene, to ensure that justice is served. If Captain Mahama was truly a soldier, I don’t think he will wish that any innocent soul suffers for his death. We must act in a manner that only those who are truly guilty will be found guilty. We must act in a manner that those who are truly innocent will walk free, and enjoy their lives. We must not force anyone to go to jail, if that person did not kill Mahama.

We should be seen to be serving justice to everyone, as a direct first step solution to the craze for instance justice. When the poor could predict that when it is done to him, he will receive equal attention, then he would have confidence in the justice delivery system, and will refrain from planting his own justice on suspected thieves.

But if we handle Captain Mahama’s case in the manner we are going about, but ignore that of Kwesi Atta whose death was merely attributed to him being an armed robber, when in fact he might not have been an armed robber, then Kwesi Atta’s family would not believe in your concept of justice, they will believe in their own concept of justice, the instant one, and the story will keep repeating itself until we are all wiped off.