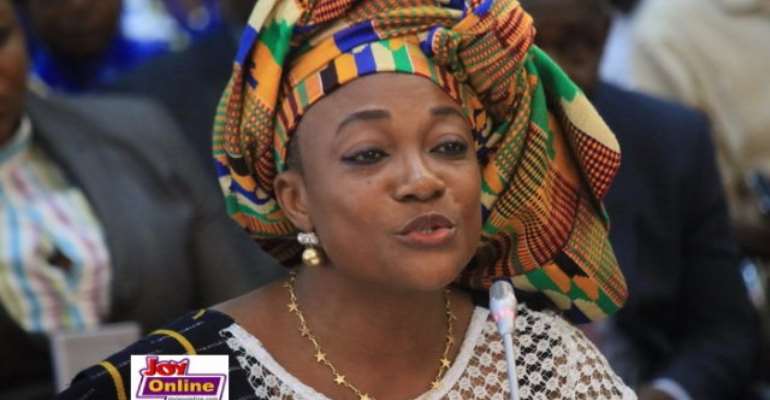 Gender Minister-designate Otiko Afisa Djaba says all Ghanaians has urged Ghanaians to set an example in speech as a way of sanitising the airwaves.

She made the comment in response to a question posed by former Deputy Education minister Samuel Okudzeto Ablakwa, one of the young appointees under the former National Democratic Congress (NDC) government.

He wanted to know how Otiko Djaba would serve as a role model to children in using temperate language.

In a statement filled with innuendos, the NPP National Women's Organiser said "babies with sharp teeth” should be a thing of the past.

The description will trigger memories of former President Rawlings who first used it to describe some young politicians in the NDC skilled in denigrating and insulting their elders.

Although President Rawlings did not mention names of persons who fit this category, many have linked the young ministers under the Mills government to this description.

When her attention was drawn by the Tamale South Member of Parliament (MP) Haruna Iddrisu to withdraw the use of the phrase “babies with sharp teeth” which he deemed offensive, Madam Djaba only wanted to know “who have I offended?”

When the Chairman of the Committee, Joseph Osei-Owusu, pressed her, whom she is referring to with the description, she retorted “I didn’t describe anyone but we should expunge that from our body politic”

The Chairman further appealed that since someone is known to have used that description to refer to some people in the past, which has stuck with, people, “if you won’t mind you can choose another expression so that you would reach the same target.”

She called on all politicians to be mindful of how they communication as it would impact on children growing up.

The nominees own choice of words came under scrutiny during her vetting at the Appointments Committee. She has once described President John Mahama as a "wicked" man and the "devil".

But Otiko Djaba insisted these words are descriptions of the President's governance style and do not amount to an insult. She said she described the now former President as wicked because he dissipated an opportunity to improve the lives of the people in the regions of the north.

His flagship agency for development of these regions, Savannah Accelerated Development Authority ( SADA ), was gutted in a scandal in which a reported ¢200 million was embezzled.

Otiko Djaba said her strong criticisms of the president was rooted in her convictions that the President who hails from the Northern region was a big disappointment. She refused to apologise.