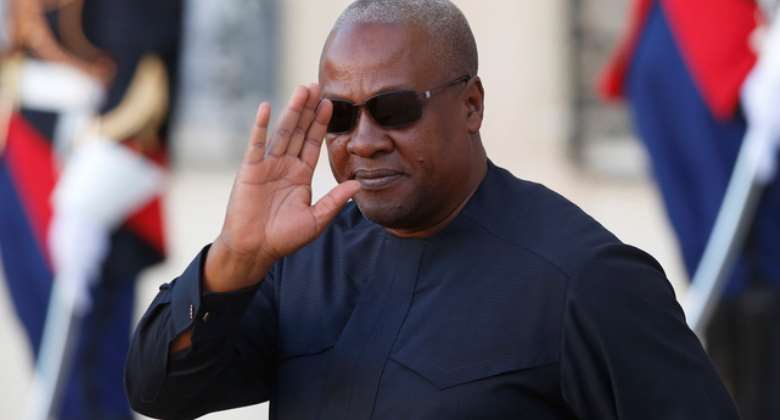 Have you taken time to observe the countenance of the defeated president of Ghana after the declaration of the results of the 2016 General Election? Just visit any abattoir near you and see the face of a dead goat and you will understand why I am asking you this question. The face of the man looks like that of a dead goat. If you watch him closely you will see two things: either he cried in the night or fought with somebody before facing the cameras. It seems Mr. Mahama will surely wet his pillow with tears the day after Nana takes over the reins of power in January 7.

The motorcade which will lead his convoy on that day to the Black Star Square will be the same motorcade which will take him to his residency on that day. After that, no motorcade will lead his convoy for the unforeseeable future. That is why the sages say whatever goes up comes down. In no time, it will dawn on Mr. Mahama that his driver will have to stop at the traffic lights when the devices signal red. Yes, in no time Mr. Mahama's driver will have to join the long traffic jam in Accra and for the first time in eight years, Mr. Mahama will feel the pain of being stuck in traffic. That is how life is.

Mr. Mahama had not seen any electoral defeat before. On three occasions he was voted to become the Parliamentarian of the people of Bole/Bamboi. Then he inherited the presidency when Professor Mils died and later declared the winner of the 2012 presidential election by Atuguba and his other four judges at the Supreme Court election petition. So when defeat came knocking on his door on 7th December 2016, the man became devastated. President Mahama cannot simply bear the pain of defeat. He is not courageous enough.

But who is to blame? This is a man who has criss-crossed the length and breadth of Ghana telling whosoever cared to listen that he will win the election hands down because according to him he has done so well that Ghanaians will never hesitate to give him the nod for the second time. He went about mocking Nana Akufo Addo that if God says you will not be a president you will never be president and that he has been ordained by God to be president of Ghana. For the past six months, a day never passes without the president commissioning one project or the other. He claimed that no president had ever performed so well as he did and that posterity will judge him. The man did not recognize the works of the founder of the party he was leading and neither did he even recognize the works of Osagyefo Dr. Kwame Nkrumah not to talk about the works of Mr. Kufour. The pride in him did not allow him to give due respect to these gentlemen who did their best to bring the country this far.

President Mahama opened his ears so wide and ready to listen to only good news about himself. His handlers and party big wigs competed among themselves to tell him only the good news and promised him that winning the election was a done deal and he too believed in their stories. Some shameless chiefs who knew the realities on the ground collected V8 cars and told him that they and their people will vote for him because only he will be able to develop the country. There was this particular chief from the Brong Ahafo Region, Nana Krawiri, the Omanhene of Sunyani Traditional Area who told John Mahama that he will win eighty to ninety percent of the votes in the region. The man did not know that even his close family members will vote against the president. At the end of the day, the NPP won all the two constituencies in his domain. Nana Addo won almost all the constituencies in the Brong Ahafo Region. Nana Krawiri, what are you promising Mr. Mahama again? Speak up because chiefs are not supposed to tell lies!

As for the Gbese Mantse, he has no shame in his dictionary. It was this disgraceful chief who said he will abdicate his stool if Nana Addo won the election. I thought he would be courageous enough to go by his words but there he sits with his protruding stomach and giggling as if he had seen the testicles of his father in-law. Another chief also threw decency to the dogs and told the president when he visited his palace that if no chief is bold enough to say it, he will say it and followed it with “JM Toaso”. All over the country, these shameless chiefs were falling over each other and worshiping the president more than the way they worship God because they all wanted favors. Now that the scale has turned, I wonder what they will say next. Animguase akwaaba!

Mr. Mahama did hide behind his attack dogs and paid them to go on an insulting spree, targeting his number one opponent in the person of Nana Addo. These disrespectful, uncouth and uncultured boys went haywire and took Nana Addo to the cleaners. Led by this idiotic guy called Salifu Maase alias Mugabe, these upstarts threw caution to the dogs and insulted the statesman to the extent that people asked: Why are they insulting the man this way? What has Nana done to them? Can't the president call his boys to order?

Thankfully, Nana Addo kept quiet and went about campaigning and appealing to the conscience of Ghanaians to vote for a change. You see, people voted for Nana Addo out of anger. The man, Nana Addo believes that the gentleman does the kindest thing. He believes people are basically good, and have the right to be free. He believes bigotry and prejudice are the worst things a person could be guilty of. In fact, he believes in the Golden Rule and in the power of prayer. All along, Nana Addo continues to believe that Ghana is not just a place in Africa, but the hope of Africa. That is why he said he believes in Ghana.

WHEN HONOUR IS PEELED FROM RICHES
No Jupiter can convince me that the out-going President Mr. John Dramani Mahama and his wife, Madam Lordina Mahama and their family members are not fabulously rich. I am yet to see someone who can put his or her hands in the fire and swear the Asantehene's great oath that Mr. Mahama and his wife are poor. The truth is that, until Mr. Mahama became the president of Ghana and ordered the create, loot and share brigade to go out there to steal from the nation's coffers, the man and his wife were not as rich as they are today. The numerous mansions, the “Dubai Connection” and the fat foreign bank accounts attest to the fact that Mr. Mahama did serve himself but surely not Ghanaians.

One is not saying that it is not good to be rich but to be rich at the expense of the poor man walking the streets is unacceptable. Today, the name John Mahama, his wife Lordina Mahama and his functionaries are synonymous to corruption. So you now understand why I say honour is peeled from riches? Despite the riches and other landed properties, the man will forever live with a disturbed conscience. Mr. Rawlings ruled this country for eight years and left behind an enviable track record. During his tenure of office, an appointee dared not steal and he made sure they were whipped into line.

When Mr. Kufour held the reins of power, he announced to the whole world that he would have zero tolerance for corruption. After his tenure of office none of his appointees went to jail for being corrupt or doing anything untoward. He too left office after serving the nation for eight years and still carries his shoulders high. The one-term presidency of Mr. Mahama is replete with a chain of corruption and thievery. The man will be remembered for leading a government of looters and history will write his name in bronze. If Mahama has any dream of becoming the president of Ghana again, he should drop the yam because Ghanaians will never do the mistake again to give him any chance to mess up the economy the way he did.

Ghanaian voters have sent a very clear message to politicians that they will punish any politician who will take their votes for granted. Appointees of President Akufo Addo should take note that we are all going to be watchmen over them. Some of us will never hesitate to spill the beans when we see corruption camped anywhere. Some supporters of the NPP were maimed and beaten into pulp before and during the last elections. These people will never sit down for a few government appointees to muddy the waters. Four years is just around the corner and as such, the NPP should not allow a few persons to destroy the party by doing anything that will give the NDC guns to fire at the party. Nana Addo told Ghanaians that he is not corrupt, has never been corrupt and will never be corrupt. If a leader makes such pronouncement, it means whosoever works with him should tow that line. I rest my case for now while I fly into the firmament where angels dwell, to rest.