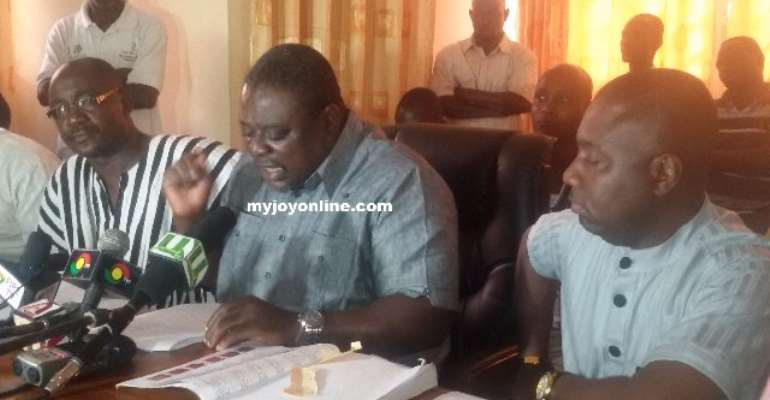 The ruling National Democratic Congress says it has uncovered a ploy by the opposition New Patriotic Party to disenfranchise some of its supporters in the Ashanti region by labeling them dead in the voters register.

Deputy General Secretary, Koku Anyidoho tells journalists the party has arrested and handed over to police two supporters of NPP with voter registers in their possession labeling some NDC supporters as dead.

Addressing a press a conference in Kumasi, he accused the New Patriotic Party of compiling a dubious list of supposed dead persons which will later be presented to the Electoral Commission for them to be deleted as part of the validation process.

“NPP is busily compiling a very dubious list of supposed dead persons that they intend to present to the Electoral Commission for such names to be deleted from the Voters Register.

The NPP has decided to create a new Voters Register in their stronghold by disenfranchising known NDC supporters”. Mr. Anyidoho revealed.

The NDC presented one Yasmin Salifu with Voter ID number 4632000974 of the Salvation Army JHS Polling station and another woman as some of the party’s supporters allegedly labeled “dead”.

Showing what he described as ‘’incontrovertible evidence in the possession of the NDC” to the media, the party intends not to officially lodge a complaint with the Electoral Commission but rather vowed to pursue the case in the courts.

He warned the party will resist any attempt by the NPP to score undue political marks in the run off to the 2016 elections, especially with machinations targeting NDC supporters from Volta and Northern regions.

“We have two who are here and have been marked as dead but they are not dead and I’m sure also you can observe that; per their names and per their physiology they are from Northern extraction. So the NPP if they are not busy saying that Volta region is full of Togolese and so we should go back to Togo, then they are busy in the Ashanti region creating the impression that Ashanti region has packed itself with strangers from northern part of Ghana”.