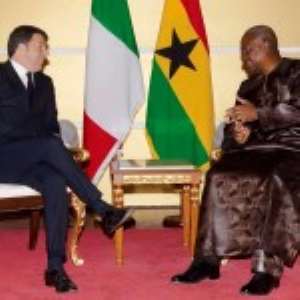 The Italian Prime Minister, Matteo Renzi, yesterday made a passionate appeal to African governments to respect human dignity by creating avenues for their people to get jobs to do.

He said by so doing the youth would stay in their respective countries with their dignity intact and contribute to the development of their countries instead of risking their lives by using unorthodox routes to travel to Europe for economic reasons.

According to the Italian Prime Minister, because of high rate of unemployment in Africa, many youth risk their lives by travelling through the Sahara Desert and cross the Mediterranean Sea to Italy and other parts of Europe to seek greener pastures, with all the uncertainties staring them in their faces.

Mr Matteo Renzi, who was addressing Ghana’s Parliament before returning to his base, said that in Italy where many African migrants end up or transit to other parts of Europe, their heritage is high respect for human dignity and that is the reason why with all the economic and security implications his government had been accommodating and granting asylum to these African migrants.

“You must create jobs and implement policies that will attract investments to stop these migrations,” he charged, stressing that Italy is ready to partner African countries that have open democracies and vibrant economies for shared growth.

With the Minority urging the Prime Minister on with ‘hear hear’, the Italian leader noted that human trafficking to Europe, especially Italy, had also reached unprecedented levels with more than 1,000 people who are associated with that trade languishing in Italian jails.

He also touched on the threat of terrorism in Africa and the world at large, saying that Africa must play its part and unite with the rest of the world to stop these terrorists from making the world unsafe to live in.

“Terrorism aims at disintegrating the society. They try to kill us and force us to live in fear. We must refuse this message and together in the name of culture, ideas and democracy fight against this terrible message and work together in unity because the future is for our children and grandchildren,” he said, adding that all Ghanaians must be involved, whether in the church or the mosque, to fight against terrorism.

On the purpose of his visit to Ghana, the Italian Prime Minister told Members of Parliament that he was here with a delegation to build on bilateral relationship with Ghana.

.
According him, his government is particularly interested in helping Ghana’s energy sector to improve power generation and also help to boost agriculture by investing in agro-processing.

He said that the $7 billion ENI gas project at the Sankofa Field, which an Italian company is involved in, would be a game-changer for the country.

He praised Ghana for its good democratic credentials and said the country had been a great model of democracy in Africa.

Earlier at a state banquet in the Prime Minister's honour at the Flagstaff House, President John Dramani Mahama appealed to the European Union (EU) to help create jobs for the youth in Africa to reduce the surge of Africans migrating to Europe.

Thousands of migrants, especially from Africa, died in 2015 on the Mediterranean Sea while trying to enter Europe.

The International Organisation for Migration (IOM) said over one million migrants and refugees crossed into Europe the same year.

President Mahama has also called on the European Union to support troubled African countries like Libya, where most migrants cross to Europe, and also urged countries that participated in the migration summit held in Valetta to implement the five-point political declaration and 16 concrete action plans agreed on at the summit “which are to be implemented by the end of 2016.”

Commenting on the Italian Prime Minister’s address, the New Patriotic Party (NPP) Member of Parliament for Kwadaso, Dr Owusu Afriyie Akoto, told DAILY GUIDE that it was refreshing for Matteo Renzi to assure the country that his government would support agriculture, which is the main driver of the economy.

He however pointed out that the Prime Minister ought to use his influence to look at the terms of the ENI power project.

According to him, the whole agreement is a rip-off for the country because the Ghana National Petroleum Corporation (GNPC) could not pre-finance the project with $150 million at such an extraordinarily high price of gas to be produced for the local market.