Nana Akufo-Addo Remains our Hope in 2016 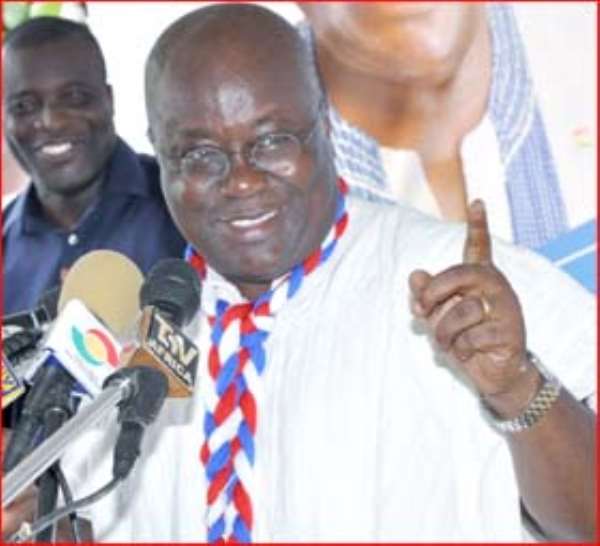 According to Hamilton Fish, the 16th Governor of New York; "If our country is worth-dying for in time of war, let us resolve that it is truly worth-living for in time of peace. Although, Ghana has not engaged in war with any country, all cannot be said to be right due to the mismanagement of the economy by president Mahama and his NDC government. Unfortunately, the Ghanaian electorates have refused to give the opportunity to those whose expertise could help turn the country's economy around, something which is difficult to comprehend. One of such personalities is Hon. Nana Addo Dankwa Akufo-Addo, a man described by no mean a person than former president Kufuor as "a man of many parts and great pedigree".

Born into a "political family", the contribution of Nana Akufo-Addo to Ghana's socio-economic and political development cannot be over-emphasized. A three-time Member of Parliament, and human rights activist, Nana Addo has distinguished himself as a Minister of Justice and Attorney-General, as well as, Foreign Affairs. His exemplary work at those two portfolios, if nothing at all, resulted in the abolition of the criminal libel law, the establishment of Fast Track High Courts, and the inflow of $547m from the Millennium Challenge Account during the Kufuor-led NPP administration.

Even though most politicians are perceived to be corrupt, I am yet to hear any such accusation leveled against the man under discussion. Surprisingly, inasmuch as Nana Addo's political opponents had deliberately subjected the man into the worst form of personal and political attacks, none of them had dared Nana Addo's credibility and integrity as far as corrupt practices are concerned. Based on this positive trait, Nana Addo once remarked; "I am not corrupt; I have never been corrupt; and I'll never be corrupt". The above statement clearly shows how committed he is to fighting this social canker when given the opportunity to lead this country.

Personally, my admiration for Nana Addo is not actually based on his good communication skills or track record. Mine is rather based on the level of tolerance, political maturity, and his vision for the country. For, in spite of the "violent cloth" put on Nana Addo's neck by the NDC propaganda machinery, the man continues to prove his critics wrong. Nana Addo has developed such a big heart and stomach to swallow all forms of 'political nonsenses' since he led the NPP in 2007. Whilst many politicians such as president Mahama had reacted angrily to certain non-personal and personal issues, Nana Addo has tolerated all shades of opinions - both internal and external, a political test which he has passed with distinction.

Again, as a tried and tested politician, Nana Addo has consistently made his vision clear for this beloved country of ours since 2008. He goes; "I am not in politics for personal gains; I have a genuine commitment toward the welfare of the Ghanaian people". Nana Addo's promise of providing free secondary education for the Ghanaian child and putting the teacher at the centre of his educational policy makes him stand tall among his compatriots, especially those who have scrapped teacher trainee allowance in their country.

It is thus imperative for the electorates to think beyond political parties and consider Nana Addo for the presidency in Election 2016. This is non-negotiable in view of the level of incompetence, corruption, and untold hardship that have befallen Ghanaians under president Mahama's misrule. One cannot therefore dispute the fact that, a Nana Addo-led NPP government is the next best alternative to the current corrupt NDC government. Indeed, Ghanaians love peace, and for that matter, want to be assured of their personal safety and that of their businesses under any government. Therefore, their dithering in voting for Nana Addo on two occasions - 2008 and 2012 cannot be said to be wrong considering the enormity of the allegations poured on him by his opponents. However, thankfully today, many Ghanaians have seen the true Nana Addo. His acceptance of the Supreme Court verdict to save precious lives and property has gone a long way in killing any negative perception about him.

In conclusion, I would only plead with the Ghanaian electorate to reconsider their voting decision on this patriot, come November 7, 2016. The electorates should bear in mind that, Ghana is currently in a monumental crisis, and therefore requires very serious, honest, and high calibre visionary leadership to take us out from this quagmire. Nana Akufo-Addo's rich political experience and wisdom must therefore not be allowed to go waste, but rather, be tapped for the benefit of all Ghanaians. Let's not miss this great opportunity by wasting our vote on the NDC for the third consecutive time.