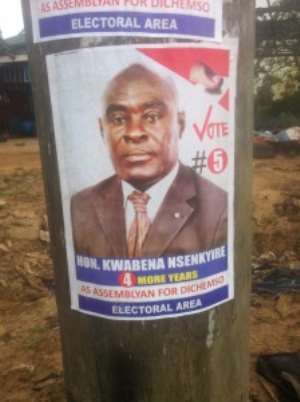 Incumbent Assembly man for Dichemso electoral area and former 1st Vice Chairman of the NPP in the Ashanti region; Hon. Kwabena Nsenkyire has been disqualified from seeking re-election as Assemblyman for his electoral area.

This was hinted by former Deputy Ashanti regional Minister, Joseph Yammin at a youth capacity building workshop organised for NDC constituency and branch organizers at Konongo in the Ashanti region.

According to him, says the disqualification of the incumbent Assemblyman was due to the fact that he portrayed partisanship in an election which was supposed to be devoid of partisan politics.

He hinted that another person who is suspected to have falsified his credentials may soon be disqualified as well.

He used the occasion of the disqualification to advise all participants in the forthcoming District Assembly elections to abide by the rules governing the process and be honest to the electorate.