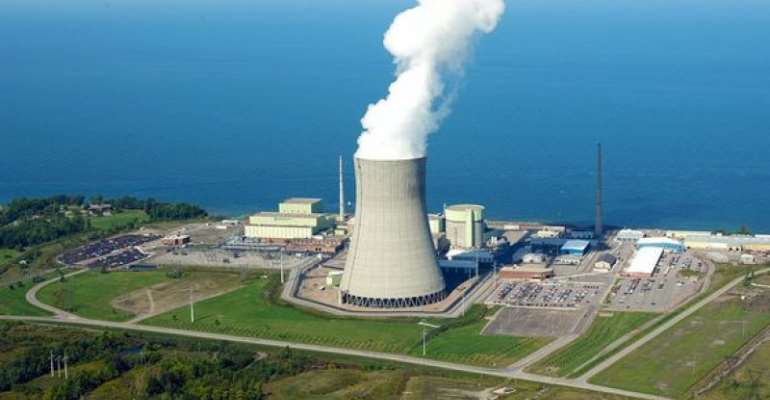 Ghana's Deputy Minister for Power, Mr John Abdulai Jinapor, and the Deputy CEO for International Business Cooperation of Rosatom, Mr Nikolay N. Spasskiy, have signed an agreement for cooperation in peaceful use of the nuclear energy in the Republic of Ghana. Mr Jinapor oversees the development of policies and legislation in the power and renewable energy sector in Ghana.

The agreement was signed at the ATOMEXPO International Forum, the largest exhibition venue for meetings and negotiations between world leaders of the nuclear power sector, held on June 1-3 in Gostiny Dvor Exhibition Center at 4 Ulitsa Ilyinka in Moscow.

The goal of the forum is to promote international cooperation between the Russian Federation and the countries of Latin America, Pacific Asia, Africa, Central and Eastern Europe in the field of nuclear power, and to discuss Russia’s proposal on developing national energy programs.

Over the past six years, the forum has become an internationally-recognized discussion venue that focuses on discussion of important issues of the nuclear power sector, and the trends of its further development.

As obtained from the ATOMEXPO International Forum organizers, the document of the agreement signed between Russia's Rosatom and Ghana's Ministry for Energy and Petroleum establishes legal framework for cooperation in the field of peaceful application of atomic energy between the two countries.

The two sides plan to jointly develop atomic energy infrastructure, and also, the plan is to construct reactors, including research reactor facilities in the Republic of Ghana. This is a framework agreement. Being signed, the document allows for development of the necessary contractual and legal framework for cooperation in the nuclear area between Russian Federation and Republic of Ghana.

Its implementation will foster deeper relations between the two countries in general while also providing the necessary conditions for promotion of the Russian technologies on the markets of the West African countries and allowing for the practical start of the joint nuclear projects.

Within the agreement, the parties are intended to develop cooperation in design and construction of power and research nuclear reactors; exploration and production of uranium deposits; nuclear fuel cycle services; production of radioisotopes and their application in industry, medicine and agriculture; education, training and retraining of experts for the nuclear energy industry.

After the signing ceremony, Dr. Kodzo K. Alabo, Ghana's Ambassador Extraordinary and Plenipotentiary to the Russian Federation & Commonwealth of Independent States (CIS), said: “the two-in-one signing ceremony that we witnessed today has monumental importance for the relations between Ghana and Russia.”

According to him, “it revives memories of the intense bilateral cooperation in the peaceful use of nuclear power between our two countries that should have resulted in the construction of Africa's first nuclear facility in the sixties, but for the reactionary coup d'état that overthrew Ghana's visionary leader, President Kwame Nkrumah in 1966.”

The documents signed define the parameters of Ghana-Russian cooperation towards the construction of a power reactor and the road map towards its realization, Dr. Alabo pointed out assertively, and added “I am confident that the commitment of the governments of both countries to the agreement will ensure that a project will materialize and transform the face of my country Ghana and give a fillip to North-South cooperation.”

Viktor Polikarpov, the Regional Vice-President of Rosatom International Network, whose key responsibilities include overseeing, implementing and managing all Russian nuclear projects in Sub-Sahara African region, told me in an interview earlier before the ATOMEXPO International Forum that “nuclear power is the only source of energy that meets all the challenges of a rapidly developing world.”

Nuclear power is unique because of the significantly low cost of electricity generated by it. That is why nuclear power plants may well feed the energy-hungry regions as well as provide for significant electricity exporting potential, he further explained.

Another proven advantage of nuclear power is its environmental friendliness. NPP's do not emit any harmful substances in the atmosphere during their operation and they are totally free of the greenhouse gas emission. The main advantage of nuclear power is the unique and large-scale impact it has on social and economic development of a whole country, according to Polikarpov.

Rosatom integrated solutions in nuclear power can be adapted to meet the client's needs and the specifics of a given project. Rosatom offers strategic partnership in the development of civil nuclear industry, for example, for South Africa and other African countries.

For reference: The basis for cooperation between the two countries in the nuclear area was formed in the first years following the independence in Ghana. Cooperation between the Russian Federation and the Republic of Ghana in the area was given a new development when in Moscow in 2012 the Memorandum of Understanding (MoU) for cooperation in peaceful use of nuclear energy was signed between Russia's Rosatom and Ghana's Atomic Energy Commission.