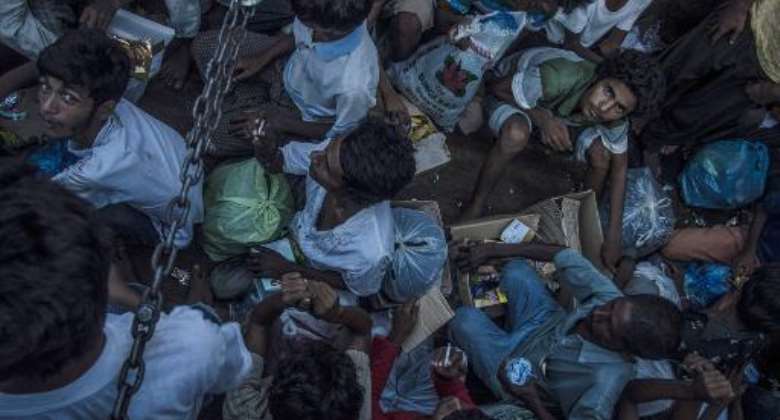 Myanmarese Muslim Rohingya residents sit inside a police truck in Birem Bayuen in Indonesia's East Aceh province on May 20, 2015. By Sutanta Aditya (AFP)

Banjul (Gambia) (AFP) - Gambia said on Wednesday it would take in all Rohingya boatpeople as part of its "sacred duty" to alleviate the suffering of fellow Muslims flooding Southeast Asia to escape oppression.

The government of the impoverished west African nation appealed to the countries of the region to send the migrants to its shores, where it said it would set them up in refugee camps.

"The government of the Gambia notes with grave concern the inhumane condition of the Rohingya people of Myanmar -- especially those referred to as 'boatpeople' -- currently drifting in the seas off the coast of Malaysia and Indonesia," it said in a statement.

"As human beings, more so fellow Muslims, it is a sacred duty to help alleviate the untold hardships and sufferings fellow human beings are confronted with."

The announcement came as the foreign ministers of Malaysia, Indonesia and Thailand -- facing global criticism for turning away rickety boats packed with starving migrants -- gathered for talks on the issue.

Following appeals by UN chief Ban Ki-moon and Washington last week for the migrants to be rescued, Pope Francis likened the plight of the Rohingya to that of Christian and ethnic Yazidi people brutalised by the Islamic State group.

Nearly 3,000 boatpeople already have swum to shore or been rescued off Malaysia, Indonesia and Thailand over the past 10 days after a Thai crackdown disrupted long-established smuggling routes, prompting some of the gangs responsible to abandon their human cargo at sea.

The UN's refugee agency told AFP on Tuesday it had received reports that at least 2,000 migrants had been stranded for weeks on boats off the Myanmar-Bangladesh coasts.

The Gambian government's position on the Rohingya contrasts sharply with President Yahya Jammeh's professed disdain for the thousands of African migrants attempting to cross the Mediterranean Sea.

More than 5,000 migrants, many from Gambia and its neighbours, have died in the past 18 months trying to cross into Europe.

Jammeh broke his public silence on the issue last week, saying in a televised address that "if these people are true Muslims... they should equally believe that their sons and daughters could have made it at home if they were ready to invest and work".

The president did not announce any proposals for solving the Mediterranean crisis but suggested that the kind of work migrants were undertaking in Europe was already available at home.

Jammeh, an outspoken military officer and former wrestler, has ruled the former British colony with an iron fist since seizing power in 1994.

The regime is frequently berated for human rights abuses, extra-judicial killings, torture and the muzzling of journalists.

A third of the population in the tiny nation survives on $1.25 or less a day, according to the UN's 2013 Human Development Report.