I will marry my Bishop's daughter 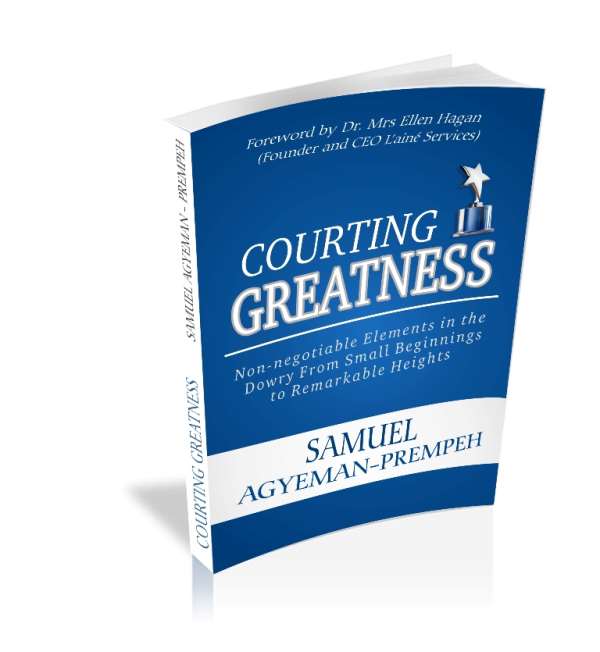 You are closer to greatness than you can imagine.

The story is told of Kofi Annan when he first joined the United Nations that he wrote a letter to his mum, stating among other things that he will one day head the UN. “One day I will become the head of this organization”, Mr. Annan mentioned to his mum, in what probably may seem like a fleeting comment. In the space of 3 decades and some years, what was seen as just a youthful expression could be alluded to as a bold rendition of the desire of the lad. Kofi Annan became the United Nations Secretary General in 1996, 34 years after writing that letter to his mum.

“One day I will become the head of this organization”. This statement was almost repeated to the interview panel, when Ishmael Yamson reported that he will head Uniliver in 20 years' time. In the space of 20 years, just as he had prophesied Mr. Ishmael Yamson became the Chairman for Uniliver. In attempting the question, “where do you see yourself in the next five (5) years?”, you may think he almost deviated when he remarked, “In 20 years I will become the chairman for this company”

Genesis chapter 37 tells the remarkable story of a teenager who was described as a dreamer, after he illustrated what later became a reality.

“We were binding sheaves of grain out in the field when suddenly my sheaf rose and stood upright, while your sheaves gathered around mine and bowed down to it”.- Genesis 37:7

Well the story climaxed when Joseph became Prime Minister and his siblings recalled the instance of his rather incessant sharing of what seemed like arrogant fairy tales.

Permit me to emphasize to you that your future is trapped in your words. Today I will encourage you to dare to dream. Make that move. You most likely have heard this statement over and over, but there is probably no other rendition to it, 'dream big'. It was the Real Estate Magnate, Donald Trump who said, 'you have to think anyway, so why not think big?' In my book, 'why not think I CAN?' writing on the topic 'why not think big?', I shared in perspective the fact that it is more rewarding having faith filled positive thoughts than making relatively small thoughts. Thinking big is a clear reflection of a victor's attitude as opposed to that of a victim. Think Big.

Thinking big is not a privilege; it is not a reserve to a few people. Rather, it is a deliberate attempt to attain your real identity. You have been created unto a higher purpose, a bigger destiny a greater future. Do not trap yourself in low thoughts or rather low aspirations.

On 28th February 2015, I was honored to share the platform with my friend Richard Akita, at 'The Power of One' Workshop. I was intrigued by something as Richard explained to me. He had this board with various pictures on them, he mentioned to me the pictures on the board represented what he wanted to achieve by the time her turns 50. Some of the images included pictures of books, where Richard mentioned he will like to write bestselling books, huge amounts he wanted to give out to charity among other challenging things people could not think about or write down, let alone paint pictures of them. Can I suggest something to you, “draw the vision”.

The story is told of the eagle which was raised among fowls. Orphaned when she was rather young, a man picked up baby eagle and brought her to a chicken farmer. The farmer placed the baby eagle among the chicken. Growing up, this eagle had no option, no imagery, than that of the surrounding environment and its inhabitants; baby eagle reduced its identity, she lived like a chicken. She acted just like a typical chicken, and this gradually became embossed in her mind, she accepted the new identity- she accepted that she was a chicken. What wrong perceptions are you accepting about yourself?

She did not think of flapping her wings, she did not dream of flying. She denied her powerful abilities. Rather she joined her new family as they scratched the ground for worms! Ouch a lower life.

Eagles eat fishes, snakes, mice, meat among others. I am certain a worm will be its last resort. However baby eagle descended that low. She had forgotten who she was.

Eagles are large and powerfully built with heavy head and beak. They have long and broad wings and are more direct and have greater flight speed than other birds. Their heavy and strong beaks equip them to tear flesh from their prey. Their sense of vision is just amazing. Eagles have got very large pupils and this reduces diffraction or the scattering of incoming light. In fact, the marital eagle is said to have up to 3.6 times human acuity enabling them to spot potential prey from long distances.

The life of an eagle of course differs greatly from that of a chicken, baby eagle therefore had no business succumbing to that new identity. Whiles eagles make their nests (eyries) in tall trees or on high cliffs, the chicken resorts to a coop.

Well as the story continued, one day an eagle flew over the barnyard where the chicken were. The eagle (who was now living as a chicken) looked up and asked rhetorically, “What kind of animal is that? How graceful, powerful, and free it is”. She quickly inquired of her friends the chickens, “what is that?” then one of them responded “Oh that is an eagle.”, the chicken added, “but don't worry yourself about that. You will never be able to fly like that”. At this pictorial view of the flying eagle and the feedback from the other chicken, the eagle returned with a gloomy countenance.

One day as she was strolling quiet a distance from the barnyard, she saw this eagle up in the sky again, she looked at herself, this time she could observe some resemblance, she became intrigued, flapped her wings but could not fly, she flapped again this time she moved up a little, “wow” she said to herself. Now she realized she belonged to the sky and not to the barnyard, after several trials, the eagle found herself above the barnyard.

You have been created unto a higher calling. Stop living like a chicken. Launch yourself into your flight mode.

You are an amazing person. You have been created to a higher life. Your deliberate decision and actions to live this life will be rooted in your knowledge and acceptance of your true identity, having a clear picture of who you are and where you want to be and of course making bold and daring confessions towards the realization of your dreams. Dream again. You are indeed outstanding.

“I will marry my Bishop's daughter; I will court greatness.”- Samuel Agyeman-Prempeh

"Greater Accra NPP is poised to recapture all lost seats in ...
35 minutes ago