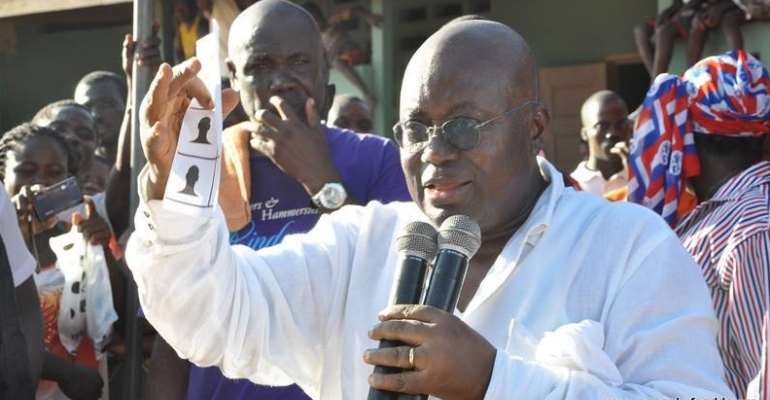 Nana Akufo-Addo has for the umpteenth time descended on corruption and stealing of money from the state kitty by public officials, advising that political leaders should lead the crusade against the social aberration by exuding good examples.

Public service, he observed, is not a place for making money, stating that those who seek to make such monies should turn to the private sector where making money is legitimate activity.

Commemoration
He was speaking during the commemoration of the 50th anniversary of the death at the Nsawam Medium Security Prisons of Dr JB Danquah on 4th February 1965 – a man regarded as a doyen of Ghanaian politics.

Corruption, he said, must be dealt with by the strengthening of the institutional mechanisms established to fight it.

'We need to strengthen the institutional mechanisms for dealing with corruption to promote this end. Above all, we need the personal examples of our political leaders, especially the president of the republic, to demonstrate that public service is exactly that, public service. Those who seek wealth in public service have no place there. Their place is in the private sector where the making of money is a legitimate and necessary activity,' he said.

He assured Ghanaians that a New Patriotic Party (NPP) government would restore their lost confidence through a prudent management of the economy.

Letters To Mahama
He said if Danquah had been alive he would have disturbed President Mahama with letters over misuse of public funds. 'I can say for certain that President Mahama would be receiving a lot of his emails and letters on the need to protect the public purse, so as the finance minister,' adding that Danquah would have been worried over the financial rot represented by the Woyomes, Gyeedas, Subahs and the others.

The lecture attracted a large turnout of people from all shades, including very important political personalities.

Nana Addo's Lamentation
He lamented the high prices of petroleum products, in spite of a remarkable drop on the international market of crude oil, attributing this to inefficiency in the management of the economy.

'NPP will bring back that confidence,' he told his audience who intermittently broke into ecstatic applause.

It was a delivery which took the audience down memory lane as it touched on the political career of Dr JB Danquah and his relationship with President Kwame Nkrumah – the man under whose watch he (JB) was gaoled without trial.

Fiscal Indiscipline
On the poor state of the economy, Nana Akufo-Addo attributed it to what he said is the fiscal indiscipline, an ingredient he said a government under him would not allow so that the economy would witness a major turnaround.

'We would move from high deficit expenditure and avoid domestic borrowing so we can bring about exchange rate stability,' he said.

He frowned upon the tendency to use taxation to finance the 2016 presidential candidate of the New Patriotic Party (NPP) and used the occasion to call for reconciliation among all his compatriots, regardless of their political allegiances.

No Ill-Feelings
He announced that the Danquah family had relinquished the ill-feelings about the regrettable death of Dr JB Danquah who was incarcerated at the Nsawam Medium Security Prison without trial.

Ghana's first President, Dr Kwame Nkrumah, under whose watch Dr Danquah was jailed until his death, Nana Addo added, had been forgiven by the family which as he said, does not harbour any ill-feelings against the man any longer.

'It is time that we moved on from the understandable bitterness that continues to fill the hearts of many who love his work and contribution because of the cruel circumstances of his death. Let me, on behalf of lovers of Danquah, especially his family of which I am proud to be one, use this occasion which commemorates the 50th anniversary of his tragic death, to forego all feelings of bitterness and to say unreservedly to Kwame Nkrumah, his family and his supporters that we forgive what took place on that day,' he underscored.

The challenges which enveloped the political life of the deceased notwithstanding, he recalled he was bereft of personal animosity and hatred against those who inflicted harm on him.