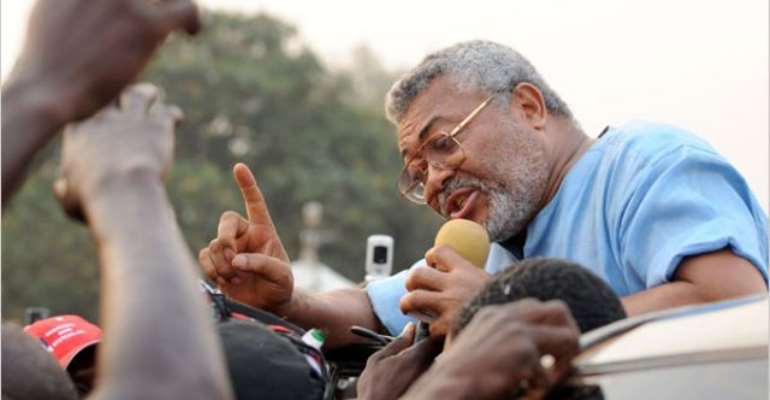 Former President Jerry Rawlings yesterday responded to the tantrums of his party's General Secretary, Johnson Asiedu-Nketia, the man who once made a subtle reference to him (Rawlings) as a 'barking dog'.

While granting an exclusive interview to Accra-based Adom FM , the fire-stoking former President stressed the need for a virtual overhaul of the leadership of the ruling National Democratic Congress (NDC), 'especially the corrupt ones' among them at the national level.

In the course of the interview, the name of Asiedu-Nketia came up when Captain Smart, host of the morning show programme, ' Edwaso nsÎµm ,' asked Mr Rawlings who the founder of the governing party was. He asked further, 'Do you think the General Secretary has performed or you think he is right behind the doors of performance?'

Like a wrestler who has the hands of his opponent tied behind him, Papa Jay, as some prefer to call Mr Rawlings, pulled no punches, but went straight at Asiedu-Nketia, fondly called General Mosquito.

Reason
'I think that guy has a certain credit to his name and that is the fact that he opens his mouth and pours acid against those he is against,' he noted.

The former President added, 'There are times that you need to throw a punch and he thinks he throws some pretty good punches; maybe that is why people think they need him. I'm just guessing, I'm just surmising.'

Asked whether he thought Asiedu-Nketia, who was allegedly introduced into politics by him (Rawlings), had not shown him enough respect, the NDC founder this time around resisted the temptation of firing more salvos. He said, 'I don't wanna talk about him. If you wanna talk about him, then we just stop this interview.'

Betty's Share
When the issue of former Attorney General and Minister of Justice, Madam Betty Mould-Iddrisu's decision to contest for the position of vice chairperson of the NDC came up for discussion, the former President made nonsense of it.

Even though he wished her well, Mr Rawlings had this to say: 'It … also looks like while some of them with questionable images and reputation and whatnots are being pushed out, others are also getting on board; for whatever reason I don't know but the judgment will have to be left to the people.

'If they do make the right decision, I think they stand a pretty good chance of helping the President. If they make the bad decisions, starting with some of those they are going to elect, I'm afraid they will be failing badly,' he warned.

In the case of the current Greater Accra Regional Chairman of the party, Ade Coker, Papa Jay said, 'I don't wanna talk about Ade Coker; his time was finished a long time ago.'

Endorsements
Johnson Asiedu Nketia aka General Mosquito
Instead, he heaped praises on one of Ade's contenders for the position, Stephen Akwetey, who is seeking to become Regional Chairman, for his recent contributions to the NDC in the region including building offices for the party.

For him, the contest for the position of National Chairman of the NDC was a two-horse race between current National Coordinator of the National Disaster Management Organisation (NADMO), Kofi Portuphy, and Alhaji Huudu Yahya, ruling out the possibility of incumbent Dr Kwabena Adjei or Dan Abodakpi coming anywhere near a win.

He however rooted for his spokesman, Kofi Adams, for the position of National Organiser as against incumbent Yaw Boateng Gyan and other contenders.

So far, the 'old man' expressed joy at the trend of voting in the ongoing elections in the NDC since according to him, the delegates were rejecting people with questionable characters and replacing them with those he described as having solid integrity.

Charge
'If they can maintain this trend, then I think they stand a pretty good chance come the 2016 election. I hope the regional election that's coming up on Saturday will also bring on board people of integrity', he noted.

Even though he said there were quite a number of them who were good, the founder of the NDC said 'there are some pretty corrupt ones that need to be thrown out.

'If the trend can be maintained up to the national level, then the NDC would have succeeded in bringing back its values—the values that gave birth to it, the value for the force of conviction as opposed to the use of money,' he said, insisting that 'the corrupting power of money and patronage should be put aside.'

Asked whether he was thereby suggesting some of the existing party executives were not people of integrity, Mr Rawlings was emphatic: 'That's exactly what I am saying. Some of them are very questionable. Some of them are extremely questionable and must give way to better blood to lead this party, to restore the force of conviction.'

That, he said, was the only hope the NDC had of going into the 2016 general elections with a conviction to win.