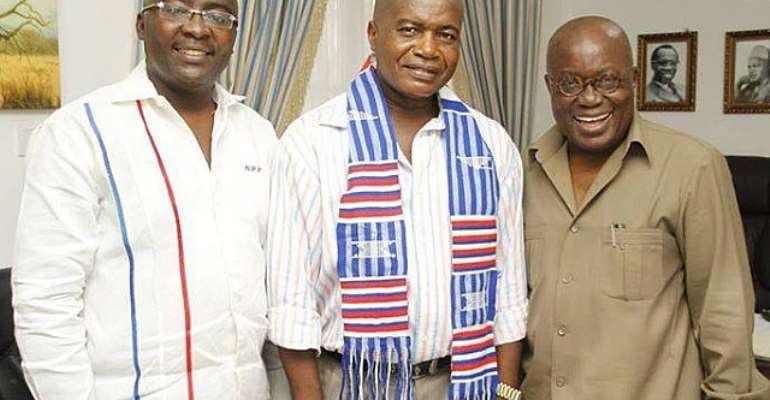 Barring any last minute hitch, newly-elected flagbearer of the New Patriotic Party (NPP), Nana Addo Dankwa Akufo-Addo, will name his running mate tomorrow after a meeting with the National Council of the party.

Nana Addo told DAILY GUIDE yesterday that he would be presenting the name of the running mate for the 2016 election to the National Council, the second highest decision making body after congress, tomorrow.

When DAILY GUIDE posed the question: 'Nana, when will you announce the name of your running mate?' to him, after seeing off Alan Kyerematen who visited him yesterday at his Nima residence, he responded: 'Thursday.'

During the campaign for the flagbearership, Nana told the party people that if given the chance to lead again, he would want to run with Dr Mahamudu Bawumia on the same ticket.

Mr Kyerematen also suggested going with Dr Bawumia in the event that he was elected flagbearer.

According to sources close to the re-elected flagbearer, since his election on Saturday, he had been consulting elders and party leaders about his choice of running mate, and the arrows seemed to point at Dr Mahamudu Bawumia.

Working Together
Nana Akufo-Addo yesterday met the steering Committee of party, to which he communicated his desire to name his running mate Thursday.

He assured the national officers of his fullest co-operation ahead of the 2016 general elections.

The meeting, which was held at the party headquarters at the behest of Nana Akufo-Addo, saw all but two of the party's officers attending, with the Chairman of the National Council of Elders, C.K. Tedam, also in attendance.

At the meeting, chaired by National Chairman Paul Afoko, Nana Akufo-Addo indicated that the sole motive for his request was to assure the national officers of his 'fullest co-operation, so that the common endeavour of achieving victory in 2016, and producing a good government come January 2017, will be realised.'

Nana Akufo-Addo further assured the executives that 'you will find nothing lacking in me as far as co-operation goes. We are to work together to change Ghana and bring about the transformation of our country. So my main purpose here, this morning, is to introduce myself to you, assure you of my fullest co-operation and to let you know that I am ready to play my part in the common agenda of victory in 2016.'

Alan
Nana Akufo-Addo hosted Alan Kwadwo Kyerematen when he called on him at his Nima residence, posting a spectacle which elated party supporters yearning for unity in the largest opposition political grouping.

When Nana Akufo-Addo emerged from his study to meet his guest and his entourage, he left nobody in doubt about their long-standing acquaintanceship, as they exchanged a prank 'hey my man' and shook hands amidst the kind of laughter reserved for good old friends.

Dr Mahamudu Bawumia
The objective of the visit was laid out when Alan Kyerematen, aka Alan Cash, in his characteristic long-sleeved African print shirt, responded to his host's address.

'Welcome, and what brings you here this morning,' Nana said, in line with Ghanaian tradition; to which his guest said, 'I am here to congratulate you once more following your emphatic victory during last Saturday's elections to pick a flagbearer for the New Patriotic Party (NPP) in the 2016 polls.'

In reassuring his host, Mr Kyerematen said, 'As I did indicate at the end of the elections at the Efua Sutherland Children's Park, you can be assured about my personal support.'

It is characteristic of the NPP, he explained, to compete for positions such as flagbearer when the chance comes, at the end of which 'comes cooperation towards the ultimate goal of victory at the polls.'

'This visit,' he went on, 'is to reiterate my pledge at the Efua Sutherland Children's Park to cooperate with you.'

In his response, Nana Akufo-Addo, spotting a white shirt and smiling broadly, welcomed Alan and his entourage.

He told him about the importance of working together to salvage the country from the challenges confronting it, adding that Ghanaians expect a lot from the leadership of the NPP.

'The Ghanaian people are expecting a lot from us. It requires that those of us in the leadership of the party work together to fulfil their desires and wishes. Anybody who knows the two of us knows there is no difficulty in us working together. We have done so in the past and I have every expectation that we will do so again closely in the future to bring about change in the country,' he said.

Nana expressed optimism that he, with the support of Alan and others, could really make a positive impact on the fortunes of the nation whose people are desperately yearning for a change.

Nana Akufo-Addo revisited Alan Kyerematen's remark on the day the declaration was made by the Electoral Commission to the effect that 'after competition comes cooperation'- which, he added, was an attribute of the NPP.

Alan Cash was accompanied by Nana Ohene Ntow, Kofi Dzamesi, Moses Osei Bonsu, aka Patak, and moustache-wearing Philip Longdon, who he described as on old friend.