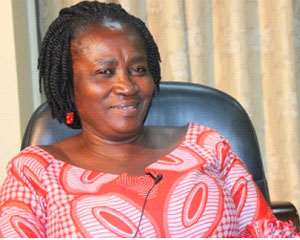 Prof Jane Nana Opoku-Agyemang, Education Minister
Today's proposed demonstration by the National Union of Polytechnic Students (GNUPS) to register their displeasure about the way the issues of books and research allowances of their lecturers are being handled by the Government, has generated mixed feelings.

This was after an Accra Circuit Court, hearing an ex-parte motion filed by the state against the students, ordered that they could only demonstrate for two days instead of four.

DSP Patrick Morkeh moved the motion, sworn to by DCOP Tetteh Yohunu, Greater Accra Regional Police Commander, who said it could have security implications for the days the students would be demonstrating.

He said the students plan to present petitions to the Ministry of Education, Youth and Sports, Parliament, the Council of State, Foreign Missions in Ghana as well as all registered political parties in the country.

In addition, he said the students intend to start the demonstration from the Obra Spot at the Kwame Nkrumah Circle from 10:00 am each day with over 5,000 members expected to participate.

Explaining further, DCOP Yohunu said that upon receiving the letter endorsed by Mr. Amponsah Manu, the coordinating secretary of the Police Service, he advised against the four days for the protest and the presentation of petitions to Foreign Missions in Ghana and the Office of the President.

According to him, the police would not be in a position to provide security for them for the four days, but were not stopping them either. They could demonstrate for only a day.

Meanwhile, an Accra High Court on Monday dismissed claims by the Labour Association that the strike action by the Polytechnic Teachers Association of Ghana (POTAG) was illegal.

The court has rather ordered compulsory arbitration between the parties in the dispute regarding the allowances of members of POTAG.

The lecturers have been out of the classrooms for more than one month; and this has adversely affected the academic calendar as all polytechnics have been closed since then.