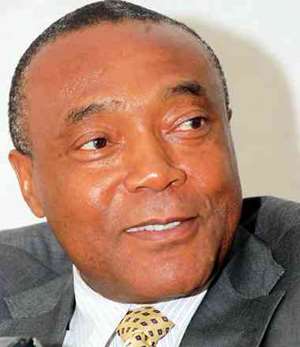 Emmanuel Ikazoboh
At the just-ended Annual General Meeting (AGM) of Ecobank Transnational Incorporated held at its headquarters in LomÃ©, Emmanuel Ikazoboh, an accountant with 35 years experience, was appointed as the Group's new Chairman.

Mr. Ikazoboh has played roles in international business management and corporate advisory capacities in both the private and public sectors and spent much of his career with Deloitte in West and Central Africa.

A press release from the bank, which made this known, said in accordance with the Governance Action Plan approved at the bank's Extraordinary General Meeting in March of this year, there has been a significant re-organization of the Group's Board of Directors.

In addition to the Group Chairman, the Non-Executive Directors include AndrÃ© Siaka, who represents shareholders in CEMAC, Dr. Adesegun Akinjuwon Akin-Olugbade, representing

Addressing shareholders at the AGM, the outgoing Interim Chairman, AndrÃ© Siaka, commented: 'The board is committed to establishing the highest standards of corporate governance. We will learn from the recent past, address all of the issues and lay firm foundations for Ecobank's continued success in the future.'

Reviewing Ecobank's 2013 financial results, Group Chief Executive, Albert Essien, said: 'The fundamentals of our business are strong and I am excited by the huge potential of our unique platform. However, I will not shy away from key areas that need to be addressed, including improving our profitability by driving efficiency across our entire network. Our performance in the first quarter of 2014 has been significantly ahead of the equivalent period last year, which gives the board confidence regarding Ecobank's prospects for the year as a whole.'

In 2013, Ecobank Ghana generated revenues in excess of US$ 2 billion while the Group's total assets amounted to US$ 22.5 billion.