Review Of The 1992 Constitution: Let’s Entrench Provisions On National Development 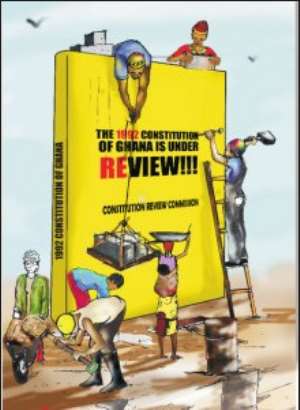 It is refreshing to note that significant progress is being made on the outcomes of the Constitution Review Process started in 2010. The Constitution Review Implementation Committee (CRIC) has submitted a draft bill for the amendment of entrenched provisions, and the Ghana Journalists Association (GJA) has commenced sensitization and training Seminars to equip Journalists for effective public education towards a referendum on entrenched provisions in the 1992 Constitution.

It is expected that the draft bill presented by the CRIC would adequately reflect the recommendation made in the Report of the Constitution Review Commission (CRC) so that it can be appreciated as a fair representation of the submissions made Ghanaians made during the review process. The CRC Report is titled “From a Political to a Developmental Constitution”.

During its work, the CRC found that there were extensive and constant demand for a binding national development plan. Everywhere in the country, and even from Ghanaians outside, there is a strong thinking that such a plan needs to be entrenched in the Constitution so that we as a people can escape from the trap of irresolution that has kept as in mediocrity and relative retrogression in our development.

To this, the government responded to the contrary. Government white paper to the CRC report disagrees with the CRC recommendation to entrench the development of a National Development Plan and to make such a plan binding to all successive governments and enforceable at the instance of any person or institution. Their reason is that such a provision would have the effect of a command model of development planning and tie the hands of successive governments to the ideological interests and policies of a particular political party. This reason, may be recognizing that the development agenda executed by ruling political parties are hinged on the ideological interests and policies of the party in government rather than on the developmental wellbeing of the people of Ghana. Thus confirming the concern that our current format for national progress is founded on politics and ideological.

Such a philosophical underpinning for national development is erroneous, antiquated and unproductive. What is not clear in the thinking of the government's response is that, it seems to assume that the development of any national development plan would be limited to the ideological interests and policies of one political party. It must be well appreciated that whereas political ideologies have their niche in development planning and delivering, it is increasing becoming obvious that the traditional socialist and capitalist philosophies are speedily losing their mutual exclusiveness. Both the right and left are moving to the center. All across the world, while watching the excesses of pragmatic governance and taming the loose posture of liberals, there is a burgeoning consensus that communism, socialism and inordinate conservative orientations are inferior tactics for improving human well-being. The capitalists don't have it all, neither do the socialists. The liberals are not omnipotent, and the conservatives are not either. So human ideology should lose its grips on the minds of our politicians.

It is interesting to note that the government accepts the CRC recommendation for a comprehensive, long-term, strategic multi-year National Development Plan but rejects that such a plan should be entrenched in the Constitution and binding to all governments irrespective of partisan and ideological politics. How can we ensure that one government will continue with a long-term national development agenda if it finds it politically disadvantageous? Even with their own manifesto promises, political parties shift the goal post when they win power. We have more than enough evidence, both historically and in contemporary times that political parties are not loyal to our development aspirations, especially when they think they stand a risk of losing political points.