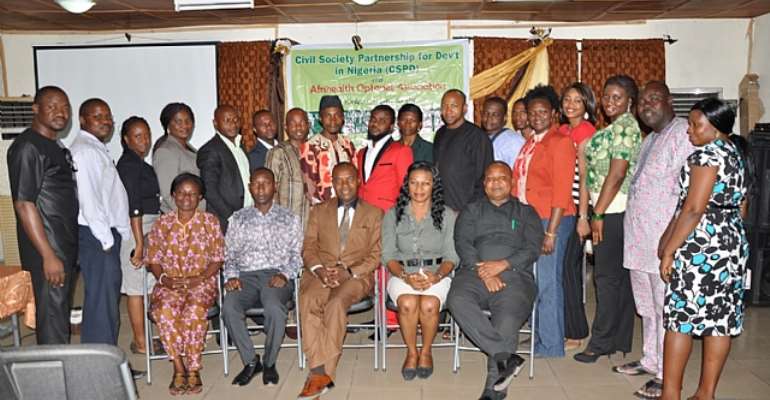 Ahead of the forthcoming National Dialogue, over one hundred Civil Society Organisations in Nigeria converged in Abuja on Wednesday 5 February 2014, and declared support for the initiative, even as they drew an agenda for consideration.

The participants drawn from all parts of the country under the aegis of Civil Society Partnership for Development in Nigeria (CSPDN) brainstormed and passed far-reaching resolutions.

According to a 12-point Communiqué issued at the end of the meeting, signed by the CSPDN National Chairman, Dr. Uzodinma Adirieje; Chairman, Communiqué Drafting Committee, Mr. John Akuse; and six other CSOs representatives (one from each of the six geopolitical zones), the third Sector representatives articulated several points which they consider very critical for the continued existence and progress of the country.

Among the issues considered for deliberation are: widespread corruption in the country, injustice and violation of laws; fundamental rights, gender equity and protection of children and vulnerable groups; citizens' participation in governance; peace and social security, as well as health and human capital development.

Others are: youth mobilization, involvement in governance and political violence; transparency and equity in resource allocation; removal of immunity clause protecting some public officers in criminal matters; effective implementation of federal character to be inclusive of residents of every state and merit-based appointments across the country; review of the country's governance structure, among others.

While appreciating the Federal Government for the inclusion of the Civil Society in the Confab, participants unanimously agreed that the 24 slots availed Civil Society Organisations in the country are grossly inadequate, considering the critical role they play as the third sector of the economy.

Continuing, they called on the National Assembly to ensure that the decisions of the Conference are given legal effect through integration into the ongoing constitutional amendment.

Highlights of the consultative meeting were the setting up of nine Technical Working Groups (TWGs) covering the identified critical areas and the nomination of twenty-four Civil Society representatives for the National Dialogue through a transparent democratic process.

Commenting on the proceedings of the meeting and selection process of Civil Society representatives, Chairman of the Communiqué drafting committee, Mr. Austin Osakwe described it as transparent and urged other sectors of the economy to learn from the third sector.