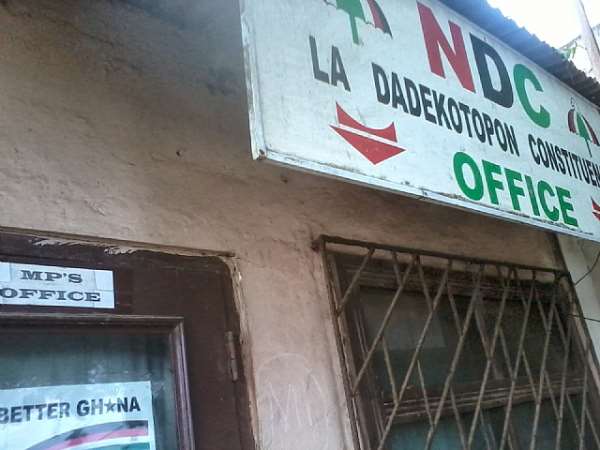 I just wish my Member of Parliament, overseer of Dadekotoponn, is reading. If he's not then may I humbly implore the symbolic Red Cockerel of his town to whisper to draw his attention to my little concern. My case is simple!! I have been wondering for some time now of the actual group of people he's been representing in Parliament.

It was one sunny afternoon about half a decade ago when a needy but brilliant SSS friend (Assistant School Prefect for that matter) and I called on Honourable in his office. The mission was a request from the friend seeking support in his secondary school education. The Immediate question from the MP was; “do you have a party card?” and “where do you vote?” Consequently, my colleague couldn't get the support due to reasons I wasn't privy to.

Whatever the reason might have been, must an elected leader know the divide from which a person belongs before granting the necessary support? I guess many innocent lives would have been lost by now if doctors and soldiers also deployed this same tactic in their line of service.

Even if this act of my needy friend is nothing to go by, I recently chanced on an inscription on my honourable MP's Office which reaffirms my concern. It made me wonder if perhaps my MP is devising a Divide and Rule policy.

The inscriptions on the office read in one breadth, 'MPs Office'; and on another 'NDC LA DADEKOTOPON CONSTITUENCY OFFICE'. I stand to be corrected but is it proper to have one room serving as a Political Party's Office (which presumably will attend to the needs of a section of people); and on other breadth as MPS Office? (Supposed to cater for all and sundry in the society?). If it's indeed proper; then questions like where do you vote and which party you belong are bound to happen.

This write-up isn't meant to play any political card with the issue under discussion. This is what I have observed and I wish I could get clarifications on! I worry anytime I see some of my clever childhood friends engaged in certain menial jobs all because they couldn't get the necessary support from leaders like our MPs.

I know of several students in my University alone who are still struggling to pay their fees. Education which ought to be affordable is gradually becoming so exorbitant for students from modest backgrounds to afford. The reason for the increment is that subvention from government is not forthcoming. If government is not living up to its obligations, must students be milked just for the universities to have their Internally Generated funds?

It might interest you to know that the Regular Student Category, which enables some tertiary students with better entry grades to receive support from government, has been cancelled in some universities like the Ghana Institute of Journalism. This new arrangement has pegged students' fees higher, irrespective of the grades they had.

Already, the education Sector is bedevilled with the 'Annual Teachers' Strike'. In addition to that is the intention to terminate allowances for trainee nurses, teacher trainees and tax private universities. These proposed plans, if implemented without careful consideration of alternatives to cushion students may create hardships.

Some of the MPs and other government officials may be doing well with other projects in their respective constituencies but acts like what I have described above leave much to be desired. If it must be done, then it must be done well. MPs must explicitly and considerably make education a priority through the MPs Common Fund. Scholarships, the GETFund and the Students Loan Trust Fund are key areas which need widening and proper implementation from government.

Cast your mind to the state of affairs in your constituency and campus? Are you impressed with your MP and 'in extenso' government? He who much is given, much is expected. We deserve better!