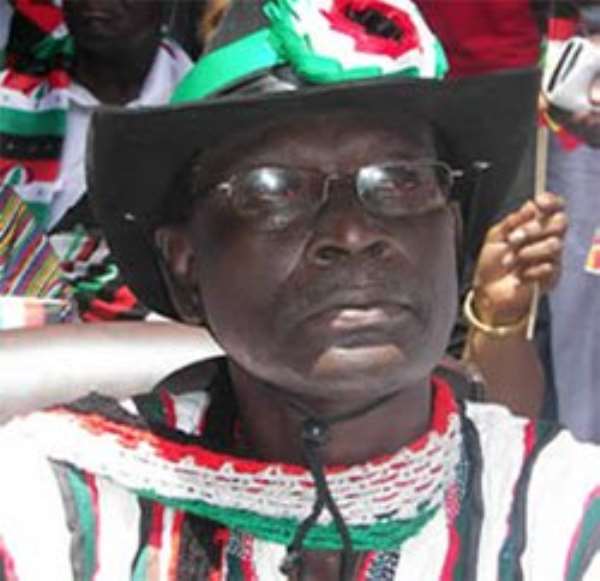 party.
The group, Young Democrats, is accusing the National Chairman of the party, Dr Kwabena Adjei and another party stalwart, Fiifi Kwetey who is a minister of state in charge of Financial and Allied Institutions, of calling for unity government prior to the Supreme Court verdict.

In a press statement, Secretary to the group, Justice Dansu Norvor said Dr

Adjei's suggestion for unity government after the Supreme Court's ruling when he graced the 21st anniversary celebrations of the opposition New Patriotic Party (NPP) smack of hypocrisy and selfishness.

sowed seeds of vindictiveness and hatred in his own party.

'If as a chairman of the biggest political grouping in the country, Dr Kwabena

with each passing day, then how is he going to tolerate the NPP's Sir John, Jake Obetsebi-Lamptey, Kennedy Agyapong, Sammy Awuku and co who are more uncompromising and fanatical in their views if a coalition government is put in place after the Supreme Court's verdict?'

Justice Norvor asked whether by their suggestions for unity government, Dr

Adjei and Fiifi Kwetey were admitting that the NDC, as a party, had made a mistake by marginalizing these 'powerful' party stalwarts who had spoken against self-centred policies and practices of those at the helm of affairs of the party or the party was admitting defeat in the election petition.

The Young Democrats noted that the party leadership unjustifiably vilified supporters of Dr Spio-Garbrah when he contested against Prof Atta Mills in the NDC presidential primary in 2006 and in the same way supporters of the former first lady, Nana Konadu Agyeman Rawlings were vilified and castigated when she also contested the sitting president, Prof Atta Mills in the 2011 presidential primary of the party at Sunyani.

The Young Democrats said Nana Konadu Agyeman Rawlings, after the primary, was also very much vilified to the extent that she had to leave the party to found her own party, National Democratic

Party (NDC).
There is a culture of undue chastisement and vilification against those who run

against incumbents within the party and so capable and competent stalwarts who are keen to take the NDC to higher heights become so worried to even declare their intentions to run.

According to the Young Democrats' secretary, all those people who have been sidelined by the leadership of the party are some of the best human resources in the country and therefore their sidelining is very detrimental to the party.

The group has therefore asked Dr Kwabena Adjei to, as a matter of urgency, resign his position honourably, since by his utterances, he had brought disgrace to the party.

'When the verdict is announced, we in the NDC must accept whatever way it may

go and allow the rule of law to govern our dear nation. Let us protect what we stand for as a party and to re-structure the NDC on the basis of the core principles that founded the party,' the Young Democrats said, stressing that intra-factional integration and tolerance is what is needed to make the NDC more vibrant and