I Have Confidence In Supreme Court – Akufo-Addo 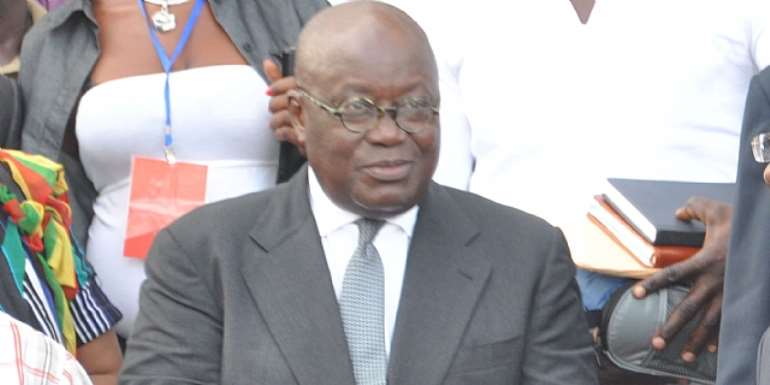 The flag bearer of the New Patriotic Party (NPP) in the 2012 general election, Nana Addo Dankwa Akufo-Addo, says he has confidence in the Supreme Court to deliver a fair judgement on August 29, 2013.

He has, therefore, reiterated his resolve to accept the verdict of the Supreme Court in the election petition and challenged the numerous members, supporters and sympathisers of the NPP to also accept the verdict whether it goes in his favour or otherwise to sustain the prevailing peace and stability of the country.

Nana Akufo-Addo made the call in an interview with the Daily Graphic at Akyem Oda on Saturday when he attended the funeral of Madam Margaret Donkor, aka Mama, the mother of Mr Justice Joe Appiah, the Member of Parliament (MP) for Ablekuma North.

He advised NPP members and supporters nationwide to strive to comport themselves and refrain from negative actions that could undermine the peace and unity of the nation before and after the Supreme Court had given the verdict on the election petition.

Nana Akufo-Addo said he was a man of peace which was why he sent the election petition for adjudication by the nine- member court to come out with the clear winner of the 2012 presidential election.

He said resorting to violence by any NPP member or supporter would defeat the aim of sending the petition to the Supreme Court to decide the actual winner of the December 7 and 8, 2012 presidential election.

Nana Akufo-Addo, who was beaming with smiles during the interview, seized the opportunity to commend all NPP members, supporters, and sympathisers for their tolerance since the election petition was sent to the Supreme Court about eight months ago.

Earlier in the day, Nana Akufo- Addo and his entourage, which included some leading members of the NPP such as Mr Yaw Osafo-Maafo, Papa Owusu Ankomah, Mr Ishmael Ashitey and a host of NPP Members of Parliament (MPs), were given a rousing welcome to Oda.

Human and vehicular traffic came to a halt for some time as a large number of people, both old and young, struggled to catch a glimpse of Nana Akufo-Addo.

It took a team of police personnel led by the Oda Municipal Police Commander, Deputy Superintendent of Police (DSP) Issah Mohammed Cantona, to control the unyielding traffic, which started from the outskirts of Oda to the Ascension Congregation of the Presbyterian Church of Ghana (PCG) at Oda Old Town, where the burial service was held.

Nana Akufo-Addo had it pretty tough entering the church building and leaving the place after the burial service for the Ages Aba Hotel for refreshment because of the thick crowd waiting outside to catch a glimpse of him.

Some of the women spread their cloths on the ground for Nana Akufo-Addo to walk on while others fanned him with their cloths.

The anxious spectators shouted loudly, 'Nana Akufo-Addo will be President of Ghana one day'; 'Nana come and save us from our economic hardships'; 'Nana you are a man of peace'; and 'Thank you for your patience'.

The West Akyem Presbyterian Chairperson of the PCG, Rev. Dr Kwame Amoah Kuma, who conducted the burial service, compared peace to a vehicle with three wheels, stressing that 'peace cannot be complete without truth, justice and forgiveness'.

He called on Ghanaians to preach peace, which means to speak the truth, to let justice prevail and to forgive others.

The funeral brought together MPs from both sides of the political divide.