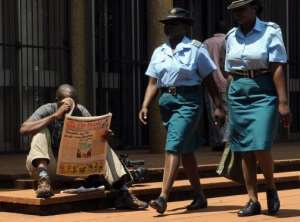 HARARE (AFP) - Almost 95 percent of Zimbabweans have voted in favour of a new constitution that would trim President Robert Mugabe's powers and pave the way for new elections, results showed Tuesday.

Tallies of the weekend referendum released by the Zimbabwe Electoral Commission showed 3,079,966 voters backed the new constitution and 179,489 were against.

"The majority of the votes were received in favour," said Lovemore Sekeramayi, the official in charge of the vote tally.

"It is declared to have been adopted by the people of Zimbabwe."

Some 56,627 ballots were spoiled, meaning that of the estimated six million Zimbabweans eligible to vote, 3.3 million exercised that right.

Mugabe and his long-time rival Prime Minister Morgan Tsvangirai both backed the draft, which will usher in fresh polls to end the pair's tense unity government.

The measures are not retroactive, so Mugabe if re-elected could serve for another 10 years -- until age 99.

Tsvangirai welcomed the result, saying it "sets in motion a new and democratic paradigm for the country."

"Millions voted for a new era that respects human dignity; an era that will see the broadening of basic human rights."

Mugabe, a Catholic, was at the Vatican Tuesday for the inaugural mass of Pope Francis.

He is expected to set an election date by March 31, with the vote taking place anytime before the end of October.

While the referendum was hailed by the United States and regional observers as peaceful and credible, the run-up to the vote was marred by isolated incidents of violence against both leaders' party officials.

A day after the Saturday vote, four of Tsvangirai's staffers were arrested along with a leading rights lawyer who was giving them legal assistance.

The four have been charged with breaching the official secrets code, impersonating the police and illegal possession of documents for criminal use.

Lawyer Beatrice Mtetwa faced a separate charge of obstructing the course of justice.

She continues to be held in police custody, despite the high court ordering her release.

That has raised fears that elections, pencilled in for July, may see a flare up of intimidation and bloodshed that has marred past elections.

Tsvangirai has called for an urgent summit of southern African leaders to safeguard elections and assess whether in Zimbabwe they can really be free and fair.

There are also doubts about whether the gears of Zimbabwe's legislative process can move fast enough to ensure rules designed to underpin a fair vote are implemented in time.

It will now take 30 days of legislative technicalities before the draft is signed into law.

A constitution amendment bill has to be tabled, debated and approved, although this is likely to be a formality.

According to McDonald Lewanika of the Zimbabwe Crisis Coalition sections of the law that affect the elections could be revamped now, with the rest coming into effect after the vote.

"It is almost certain that elections will be (held) this year," he said.

Jonathan Moyo, a member of ZANU-PF's supreme decision making body, the politburo, told AFP it was possible for parliament to move quickly.

Amending the electoral laws in line with the constitution could be finalised even within weeks, he said.

"Its adoption as a bill is a formality... there is no basis for grandstanding or politicking to waste time. It can be done in a day," said Moyo.

Moyo said law drafters are already working on the changes that will impact directly on the holding of polls.

"The fact that when the process started in April 2010 it was expected to last 18 months, now we are in our 47th month, there is no need to waste time.

"There is more than enough time to align the electoral laws with the constitution," he said

Akufo-Addo Wants 4more Years For What? – Mahama
13 minutes ago