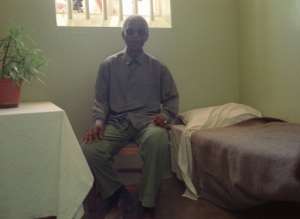 The game, designed to be an educational tool, will be modelled on life on the island where South Africa's anti-apartheid campaigners were jailed and will be released next year as part of a multi-media project dubbed "Mandela 27."

The title is a reference to the number of years the anti-apartheid icon spent in jail before his release in 1990.

Discussions are still ongoing as to whether Mandela, whose image use requires permission, may be a character in the game.

It is one of several projects in "Mandela 27" which will link events that took place in Europe and South Africa during his incarceration.

"The project is really all about the cultural events that happened during the 27 years that Nelson Mandela was locked up," said Jacqueline Cawston of Coventry University's Serious Games Institute in Britain.

Next month, an interactive website will be launched showing events in Europe and South Africa during those years will also put the spotlight on music, art, and theatre.

David Powell, of the Swedish firm Elderberry, said the website will document social and cultural events during a time of political crackdown in South Africa and when Europe was also going undergoing democratic change.

Life-size prison cells modelled on Mandela's cell will also be built for exhibitions in Europe and South Africa with multi-media displays from 2014.