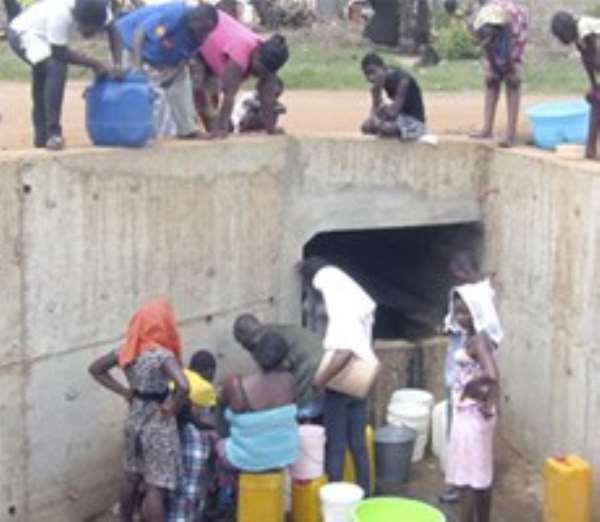 Residents in many parts of Accra and Tema would have to live with a water rationing exercise being undertaken by the Ghana Urban Water Limited (GUWL) for the next six months.

The exercise, according to the service provider, has become necessary, following a detection of a structural defect in four out of the 12 filters at the Weija Treatment Plant.

"The challenge is technical and it's as a result of structural defects detected in four out of 12 filters at the Weija Treatment Plant about two weeks ago.

The defect, according to the Communications Manager at the GUWL, Mr Stanley Martey, required a complete redesigning and reconstruction of the four filters, an exercise which would take about six months to complete.

Communities in western, eastern, and central parts of Accra, as well as those in the Tema metropolitan area, have been affected by the breakdown of the four filters.

The damage to the filters is now being assessed by engineers of the Ghana Water Company and specialist contractors in water treatment plant design and construction. Water filters remove impurities from water by means of fine physical barrier, a chemical process or a biological process.

The Ghana Water Company Limited (GWCL) produces water while the GUWL, which is a subsidiary of the GWCL, manages the water.

Speaking to the Daily Graphic, Mr Martey indicated that the breakdown of the filters had resulted in a shortfall of 20 per cent of water production, representing 10 million gallons of water produced daily.

Residents in the affected areas had earlier suffered severe water shortage, some for as long as three weeks, a situation which compelled families to travel miles in search of the basic commodity as their taps remained dry.

Mr Martey explained that the company "is aware of the irregular water situation being experienced in those parts of the city and our engineers are working around the clock to rectify the situation and to improve on water flow".

"In order not to compromise on the quality of water produced, the company has had to isolate these filters and this has resulted in a shortfall in production of approximately 20 per cent, transmitting into about 10 million gallons per day," he stated.

The Weija Treatment Plant is not interconnected with any treatment plant in Accra and cainnot, therefore, draw additional water to support 55 million gallons being produced daily by the plant.

According to Mr Martey, the plant rather pumped water to the Accra Booster Station at Okponglo, which was used to serve those in the eastern and central parts of Accra.

"Now that we are not producing at full capacity, we are not able to pump water regularly to the booster station, and that is why water supply to those parts of Accra is also being rationed," he stated.

In the interim, the GUWL and GWCL are appealing to residents to use treated water judiciously.

Mr Martey said as part of water conservation measures, the indiscriminate watering of lawns with treated water must stop. Also, residents must use treated water moderately to wash their vehicles by using buckets instead of hose.

In addition, Mr Martey stated that households must also repair all leakages in their homes and use ball-valves in reservoirs to prevent overflowing of treated water.

He advised households to make water storage a part of their daily routine to ensure that there was water anytime the taps were dry.

Mr Martey also asked residents to report all burst pipes and leakages immediately to the nearest GUWL or GWCL and other affiliate offices for immediate repair.

Residents, he stated, must report all persons involved in illegal connections, by-passes and any malpractices to the two companies.