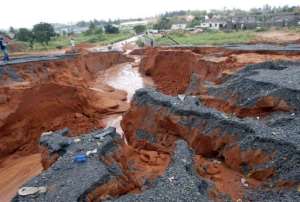 XAI-XAI, Mozambique (AFP) - Floods in southern Mozambique have displaced up to 70,000 people and cut power exports to energy-hungry neighbour South Africa in half, officials said Thursday.

The south and centre of the country have been placed on red alert after experiencing the heaviest rainfall since devastating floods killed some 800 people in 2000.

In some places current water levels are higher than they were during that disaster.

As the Limpopo River raged through the southern town of Chokwe, people slept in the open, many by the roadside, local media reported. The record flood levels submerged houses in some places, emergency officials said.

But she added: "Our in-country stocks are limited. We are requesting donor support."

Nine rivers in six water systems were still above disaster levels Thursday. The waters were predicted to drop in Chokwe, but rise at the Limpopo River's mouth in Xai-Xai on the Indian Ocean.

Meanwhile convoys of cars packed with people's belongings were leaving Xai-Xai, capital of southern province Gaza, as the city braced for the deluge, an AFP correspondent reported.

Floodwaters could hit the coast as early as Thursday night and authorities earlier issued a 48-hour evacuation order.

Onlookers crowded the banks of the swollen Limpopo River watching evacuations. Authorities say most people heeded the warning to move to higher ground.

Aid agencies are sending trucks with food and emergency supplies to emergency shelters near Chokwe, where people are still arriving on foot or the back of trucks.

Most are women, children and the elderly. So far very little food has reached them since they fled their homes early Tuesday.

Locals were slow to evacuate the town, which complicated humanitarian programmes, said Castro.

Mozambique remains one of the poorest countries in the world, ranking 184th out of 187 countries on the United Nations Development Programme's Human Development Index.

Heavy rains are predicted to pelt the south until next Tuesday.

In neighbouring South Africa 15,000 crocodiles escaped from a farm as the Limpopo flooded upstream from Mozambique.

"That has meant the supplies from Mozambique have been reduced. We are getting much less than 650 megawatts... which is less than half of what it should be," she said.

Eskom imports between 1,300 and 1,500 megawatts of electricity from Mozambique's Hidroelectrica de Cahora Bassa (HCB), the operators of one of Africa's largest hydro-electric projects.

Work is underway to fix the transmission line, and South Africa is helping its impoverished neighbour with the repair works, the Eskom spokeswoman said.

In the meantime, the group is getting electricity from other providers to avoid brownouts.