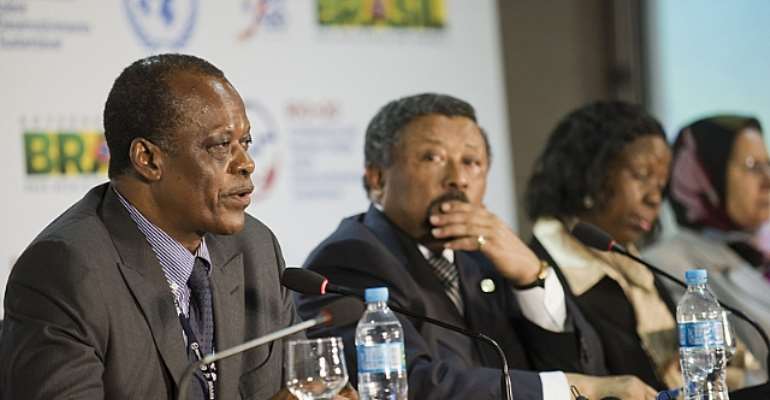 African expectations were high for the United Nations Conference on Sustainable Development, the biggest UN summit ever. The conference, held in Rio de Janeiro, Brazil, in June, was “too important to fail,” said UN Secretary-General Ban Ki-moon at the outset. Under the theme of “The Future We Want,” many of the 100 heads of state and more than 40,000 participants demanded ambitious and measurable outcomes to address sustainability issues such as the “green economy,” climate change and so on. Yet when it was over, the “Rio+20” summit left a heated debate over whether those goals had been met.

For African delegates, the general view was that while the continent did not come away with a basketful of goodies, it also did not leave with empty hands. Izabella Teixeira, Brazil's environment minister, noted that not everyone was going to be happy with the result. Negotiating with 193 nations to agree on consensus outcomes would inevitably be a grinding task, she said. Some arguments will prevail, some will not.

Africa's preparations for Rio+20 began with a meeting of its environment ministers in Ethiopia in October 2011. There they hammered out Africa's consensus statement. Africa anchored its case on two broad principles: that the continent is making serious efforts towards sustainable development and that the world should support those efforts.

The 14-page statement presented many positions, including a call for a stronger, independent and well financed UN Environment Programme (UNEP), which is based in Nairobi, Kenya. UNEP should have “secure, stable, additional and predictable financing to fulfil its mandate,” argued the African statement. At Rio, delegates agreed that the programme needs bolstering.

Africa also asked developed countries to allocate 0.7 per cent of their gross national product (GNP) as aid to developing countries and canvassed for “equitable, durable and development-oriented solutions to debt problems.”

At the summit, the coordinator of African negotiators, Macharia Kamau of Kenya, said that “the ability of African countries to implement agreements on sustainable development is only possible if they are empowered with the resources and means to undertake development that will protect biodiversity and not lead to climate change.” There was no concrete commitment on this, although future talks are planned.

South African President Jacob Zuma, who was very active in Rio, said that the “outcomes have refocused the attention of the world leaders to the daunting challenges of addressing global poverty, inequality and the deteriorating state of the environment.”

Sunita Narain, an Indian environmentalist, went as far as to call the Rio outcome document a “victory for the developing world … because it reiterates the principle of common but differentiated responsibilities and respective capabilities.” That terminology relates to a shared vision for combating climate change based upon each country's social and economic capacities.

Ms. Narain also noted that the summit “did not dismantle the framework of justice and equity in global negotiations.” She thus alluded to the successful effort by developing countries, especially India, China and those in Africa, to push back a proposal by the rich countries to set targets and timetables towards a “green economy.” Such targets, developing countries feared, could have led to trade restrictions or other sanctions if they did not move quickly enough.

African negotiators, especially from South Africa, wanted specific commitments on Sustainable Development Goals (SDGs), which are expected to replace the Millennium Development Goals after their expiration in 2015. The delegates agreed to constitute by next year a 30-member working group under the UN General Assembly to report on such global SDGs. In addition, there will be an intergovernmental process, supervised by the General Assembly, that by 2014 will recommend ways to finance a sustainability strategy.

“The formulation of the SDGs, and their interface with the post-2015 development agenda, will be one of the most important follow-up actions initiated by the Rio+20 summit,” argues Martin Khor, executive director of the South Centre, a Switzerland-based organization of developing country governments. “At least the world has agreed to continue to promote sustainable development,” adds Manish Bapna, acting president of the World Resources Institute, a US-based environmental think tank.

In contrast to the gradual approach seemingly favoured by governments, it appears that businesses, non-governmental organizations (NGOs), civil society groups, universities and others are revving up momentum. The UN reports that, together with governments, such groups made about 700 commitments, totalling more than $500 billion. Of that amount, $50 billion will be used for an initiative by the UN Secretary-General to achieve universal access to sustainable energy by 2030.

José María Figueres, former president of Costa Rica, said, “Those who have failed you, Mr. Sha, are the governments, not the CEOs, not the NGOs.” Mr. Sha Zukang headed the conference secretariat and is UN under-secretary-general for economic and social affairs.

While some African leaders remain hopeful, the Africa Progress Panel, a group of eminent individuals headed by former UN Secretary-General Kofi Annan, believes that the conference commitments were too vague: “The lack of commitment to defined and measurable sustainable development goals at the Rio+20 summit is a profoundly disturbing outcome.”

Others believe the conference did not adequately reflect a number of positive developments around the world. “Just look at Germany's shift to clean energy,” notes Mr. Bapna, “Niger's efforts to re-green its landscape or Rio's just- launched bus rapid transit system.”

There is no doubt that the conference did not meet everyone's expectations. Yet many elements in the outcome document satisfied some African delegates. The next challenge is for world leaders, businesses and NGOs to come through on their promises. “The speeches are over. Now the work begins,” said Mr. Ban. “Rio+20 has affirmed fundamental principles — renewed essential commitments — and given us new direction.”