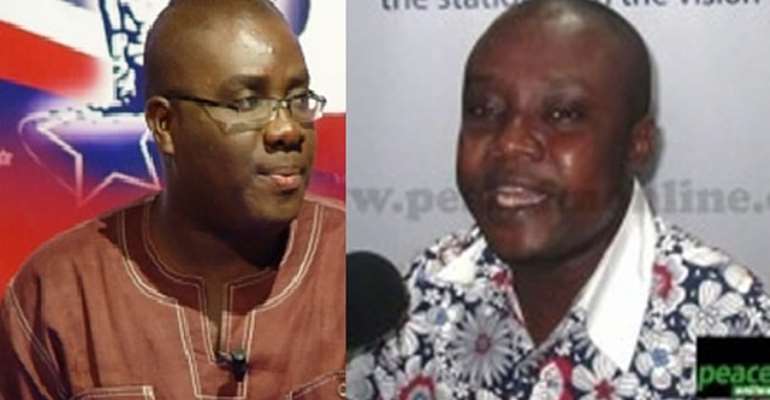 A member of the President Mills-led government communication team, Mr. Gabby Assumeng has accused the New Patriotic Party (NPP) of being behind the rapid depreciation in the value of the cedi. According to Mr. Assuming the NPP has been able to convince its supporters who are dealers in second hand clothing, popularly known as “folks” to increase the importation of the commodity with hard earned precious dollars, with the single purpose of causing the value of the cedi to depreciate.

Mr. Assumeng made the submission on Peace FM's flagship current affairs programme, Kokrokoo. Explaining, he said that one of the causes of the fast depreciation of the value of the cedi, which he admitted is causing some headache to the Mills/Mahama government, is the high importation of virtually everything consumable including tooth-picks, tissue papers, and especially, second hand clothing.

Mr. Assumeng said that when the NDC government identified the importation of second-hand clothing as one of the core factors of the Cedi's depreciation, it decided to take the appropriate measures to stem the tide, including banning the importation of these second-hand clothing. Unfortunately the NPP was able to organise its members and sympathizers around the Kantamanto area, most of who deal in these goods to up their imports, thereby undermining government's efforts to arrest the fall in the Cedi's value.

He questioned the rationale behind the NPP's criticism of the government for doing little to salvage to fall in the Cedi's value, whilst they do everything behind the curtains to ensure the NDC's failure

Reacting to Mr. Assumeng's wild accusations' Deputy Director of Communications of the NPP, Mr. Sammy Awuku advised the NDC to keep their eyes on the ball and work hard to salvage the nation's crumbling economy instead of sitting on the fence and accusing whoever and whatever is accusable, for the poor state of the economy.

Citing the violence being perpetrated by NDC macho men in the on-going biometric registration exercise, the lies being spewed by Hon (?) Fiifi Kwetey in their 'Setting the Records Straight” fora, the desperate attempt by Deputy Minister for Energy Hon (?) Innusah Fuseini to blame the NPP for the recent nation-wide power outages, and now Gabby Assumeng's cedi depreciation blame on the NPP, Mr. Awuku likened the NDC to an imminently dying horse which will do anything and everything to avoid the inevitable: a landslide defeat come December 7, 2012.