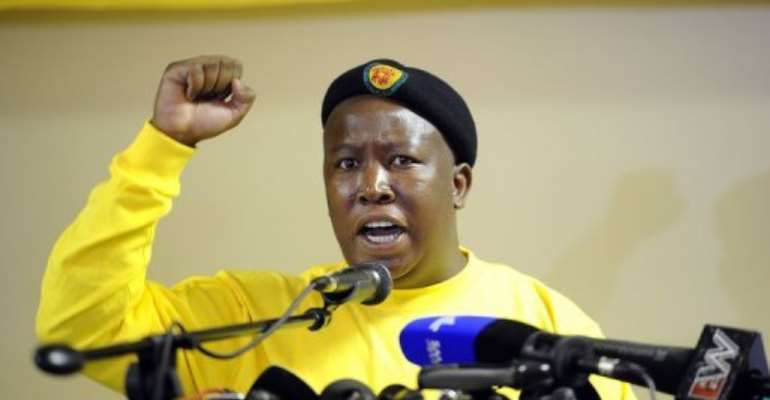 Julius Malema said his expulsion was "not the end of the road". By Stephane de Sakutin (AFP)

The decision by the African National Congress late Wednesday sparked overnight clashes between Malema's supporters and rivals in his hometown of Sheshego, in northern Limpopo province, Sapa news agency reported.

Shots were fired when a caravan of anti-Malema demonstrators brandishing a cardboard tombstone with the words "RIP Julius" and "corrupt dictator" descended on the street where he had gathered supporters ahead of the ruling.

The pro-Malema camp blockaded the road, but fighting broke out between the two factions and stones were hurled at a police car when it arrived to separate the rival groups, reports said.

"We must accept that this is the decision, but that is not the end of the road," Malema, who has two weeks to appeal his expulsion, said on public broadcaster SABC.

"It is still early to celebrate because the road ahead of us is going to be very long and needs men and women... who are very strong.

"If you are weak, you are going to fall in the process," said Malema, who turns 31 on Saturday.

"I'm not a soldier who is prepared to fall in the battle, I will die with my boots on, I will die for what I believe in."

But within the ANC, Malema appears increasingly isolated.

A party disciplinary hearing in November suspended him for five years, after finding him guilty of provoking divisions in the ANC and tarnishing its image.

An appeals panel in February upheld his conviction, but allowed him a new hearing to argue for a lesser sentence.

In the meantime, he kept up his campaign against Zuma at rallies across the country and made thinly veiled threats to turn the nation's youth against the ANC, which was once led by South Africa's elder statesman Nelson Mandela.

It justified his expulsion by underscoring "the cumulative effect of comrade Malema's past and present offences, coupled with his own evidence of lack of remorse and disrespect for the ANC constitution and its structures".

Malema has stirred a national debate on class and poverty with his call to nationalise mines and seize white-owned farms to help the nearly 40 percent of the population living on less than two dollars a day.

Despite the breadth of the debate, and the passions aroused by Malema, his conviction was based largely on charges that he had tarnished the party's reputation, created divisions within its ranks, and failed to follow its rules.

Among his offences were calling for the overthrow of the government in democratic Botswana and praising former president Thabo Mbeki, at Zuma's expense.

Malema was a key ally when Zuma toppled Mbeki to take control of the ANC in 2007, but he later turned on Zuma, praising Mbeki as a better leader.

The youth league's "young lions", as members are known, have also criticised Zuma for failing to do more to end poverty after 18 years under an ANC government.

But Malema's calls have been diluted by his own lavish lifestyle and shady dealings. He faces a separate police investigation into accusations he peddled his political influence in possibly corrupt business dealings.