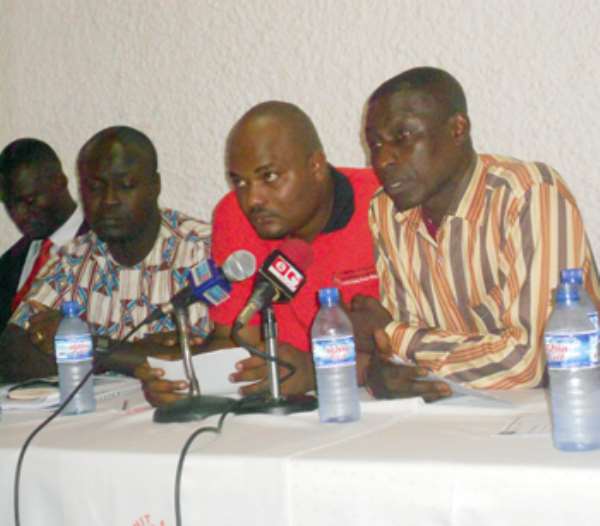 The Alliance for Accountable Governance (AFAG) has announced its intention to embark on massive demonstrations across the country to express the group's dissatisfaction with the recent increase in fuel prices and the way the government is handling the Woyome case.

A statement issued by the group at a press conference in Accra, indicates that the first demonstration would be staged in Accra and is due for Wednesday, January 25, 2012.

This, according to the group, would be the beginning of an unprecedented start-up of a series of mass actions which would allow Ghanaians to express their massive dissatisfaction towards the government's deliberate posture of 'do no evil, see no evil but sit on massive evil.'

The group said 'It has become more than clear that the NDC Government headed by Professor Mills for exactly three years has exhibited to Ghanaians both home and abroad that all caution from them through AFAG to government as regard the fading purchasing power of the Ghanaian, the high prices of rents, food, and other goods and services has fallen on deaf ears.'

The group continued that the cry and pain of the ordinary Ghanaian as at now had grown from worse to worst whilst poverty levels were unprecedented.

According to AFAG, from January 2009 till date, the NDC government's stance and posture gave credence to the fact that they were not taking into account the plight of the ordinary Ghanaian. 'We in AFAG are more than resolved in our effort to expose the level of mismanagement and grave corruption hitting the NDC's Government,' the group stated.

According to the group, if the massive corruption rocking the government and public institutions was controlled to the barest minimum, Ghanaians would be spared living in fear and panic each day about the rising cost of living and further burdening of their already impoverished micro-economy with taxes and fuel price increases.

'It is worthy of note that at a point where promises in the better Ghana social contract book and the budget from 2009-11still remain an illusion, the NDC find at the top of their scale of preference a $20 million (c300 billion) ultra-modern headquarters at Adabraka and 80 plots of land at Oyibi for their school.

'This c300 billion would have been able to provide the needed relief to Ghanaians as petroleum subsidies for 1 year and 4 months,' the group said.

'What has happened to monies up to the tune of Ghc690million (6.9trillion) lodged at Ecobank as a result of the illegal margin on petroleum product price-build -up? Is this not able to provide over 20 years of relief as subsidies on petroleum products to Ghanaians?'

AFAG continued that there had been absolute disregard for the rule of law in the matter where the NPA per an Accra High court order has been asked to reduce the prices of petroleum products but went on to effect a 15-30% increase (with a feeble excuse as due to the removal of subsidies on petroleum products), though the court was yet, on the 10th of January, to determine the viability of the their motion for a stay of execution of the previous High court ruling.

Touching on the Wayome case, the group said, in the history of Ghana, no corruption or scandal was closer to the financial thunder that hit Ghanaians last year, to the extent that a man got well paid for an amount of C570 billion without a contract?

'We are aware and privy to all the arguments advanced since the incident broke out. Our interest has to do with how this money is returned to the consolidated fund with all those found culpable made to face the full rigors of the law,' it said.

AFAG members said they were shocked by the directive of the President for EOCO to investigate (this massive scandal which has ignited public fury and interest) instead of ordering a public enquiry which is only right in line with the President's political party's intrinsic principle of extolling probity, accountability and transparency.

What will therefore become of the investigations especially when EOCO is under the legal remit of the A-G department and of which, in this case, the A-G is an interested party(Act 804)?, the group questioned.

Aside all these, the group said 'it is again mind-boggling for AFAG in particular and Ghanaians at large to exonerate the Presidency out of the Woyome case.

'It is worthy of note that the Attorney-General is the principal legal advisor to the Government. The Government is not under any obligation or whatsoever to accept the advice of the A-G hook, line and sinker…' They therefore challenged the President to call for a public enquiry or forever be held responsible for the scandal.

According to the group, the monies involved in the unprecedented chain of scandals including that of the ultra modern $20 million headquarters of the NDC is enough to provide fuel subsidies to Ghanaians for over 30 years.

AFAG said 'This chain of scandals is a cause of the heavy toll on the public purse and for which the inability of the President to act decisively to deter others from perpetuating similar crimes has resulted in the removal of subsidies and the will of government for Ghanaians to pay the full cost recovery on petroleum products.'