US reaches out to Egypt's Muslim Brotherhood 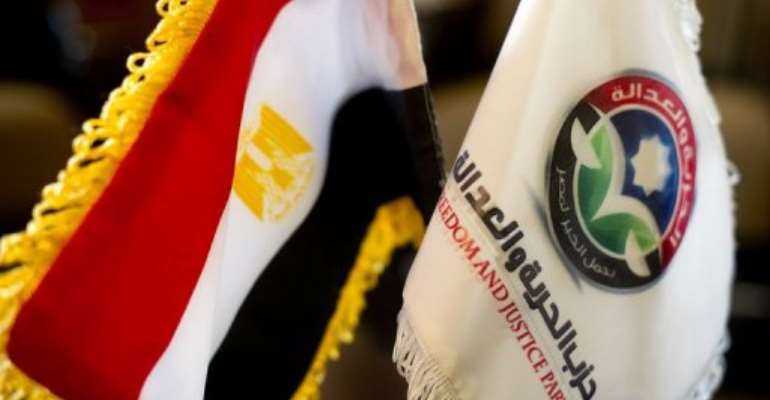 An Egyptian flag is placed next to the flag of the Freedom and Justice Party in Cairo. By Odd Andersen (AFP/File)

WASHINGTON (AFP) - A once reluctant United States is reaching out to the Muslim Brotherhood in a nod to Egypt's new political reality, but concerns linger about the group's attitude toward minorities, women and the peace treaty with Israel.

In the wake of president Hosni Mubarak's ouster last February, the Freedom and Justice Party, the Brotherhood's political arm, has claimed the lead in the final stage of parliamentary elections after leading throughout.

"It's clear that they (the Brotherhood) are now the only game in town," and US officials must talk to them, said Marina Ottaway, who heads the Middle East program in Washington for the Carnegie Endowment for International Peace.

Even before the elections began, the United States knew it had to deal with the Muslim Brotherhood, the best organized political movement in an Egypt which is no longer dominated by Mubarak's National Democratic Party.

Secretary of State Hillary Clinton said before the polls that the United States had pursued "limited contacts" with the Brotherhood as Washington was "re-engaging in" a six-year-old policy in light of Egypt's political changes.

Ottaway said president George W. Bush's administration stopped talking about its Freedom Agenda of democracy promotion after candidates backed by the Brotherhood gained 20 percent of parliamentary seats in the 2005 election.

The administration, she told AFP, "essentially bought Mubarak's line" that the Brotherhood and its links to Islamist militants were a threat to Egypt's and the region's stability, even though it had renounced violence decades ago.

The most populous Arab country, Egypt has been the lynchpin of US policy in the Middle East since 1979 when it became the first Arab state to sign a peace treaty with Israel.

"The US essentially backed Mubarak in its repression of the Muslim Brotherhood," Ottaway said. US officials also turned down invitations by her think-tank to attend post-2005 meetings with Arab Islamist groups, including Egypt's Muslim Brotherhood.

"For the US now to reach out to the Muslim Brotherhood is a big step, it's a step that's long overdue, but it's a step that the United States has resisted," she added. "It's a huge change and they're doing it out of necessity."

Analyst Nathan Brown said the Brotherhood has also "given just enough in terms of reassuring signals to slightly raise the comfort level with them in the US" and justify contacts.

Brown, a George Washington University professor, said the Brotherhood also recognizes the reality that the United States remains an important diplomatic player it has to work with.

But Brown noted "there's no question at all that the Muslim Brotherhood is just a socially and politically very conservative organization" that raises concerns about the place of women and Egypt's Christian minority.

And there remains "a big foreign policy concern" about the Brotherhood's attitude to the peace treaty with Israel.

"On that score, the Brotherhood has kind of given reassuring signals but at this point they're fairly general," he said, adding: "The Brotherhood, as an organization, is close to Hamas (in Gaza) and hostile to Israel."

Shibley Telhami, a University of Maryland professor, said the Brotherhood does not want to "rock the boat on foreign policy" or make certain drastic domestic changes as it seeks repairs for Egypt's badly damaged economy.

For one, he said, it will want Egypt to continue receiving US and other foreign aid. It is also unlikely, at least in the short term, to ban alcohol or bikinis as it tries to revive tourism, an economic mainstay, he said.

But he said the Brotherhood will be far more responsive to public opinion than Mubarak ever was.

If Israel launches a war in the Gaza Strip like the one in December 2008, he said, an Egypt under the Brotherhood's sway could take a "far more aggressive" stance toward Israel, even if it does not seek an end to the peace treaty.

In discussing contacts with the Brotherhood, Clinton's spokeswoman Victoria Nuland said last week that Washington had "some good reassurances from different interlocutors" on respect for human rights and Egypt's international obligations, an allusion to the peace treaty.

But she added: "We will continue to seek those kinds of reassurances going forward."