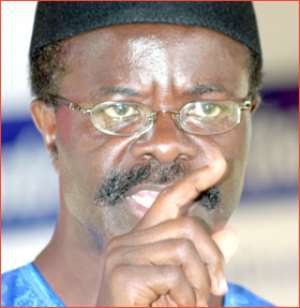 Monday 28th November 2011 will stand out as the day a strong attempt was made to push Dr. Papa Kwesi Nduom out of the CPP. Not that he has not made contributions to the Party, but that he is not favoured by some members of the national executives to lead the CPP in 2012 as its Presidential Candidate. In an amazing, coordinated attack, Ivor Greenstreet in the morning fingered Dr. Nduom as the one behind the anger being expressed throughout the country against him for declaring on national radio the “decision” to open nominations for parliamentary and presidential aspirants “sometime next year”. Samia Nkrumah in the afternoon called Dr. Nduom a man without discipline and the cause of disunity and disaffection in the CPP. In an attack unprecedented by someone in the high position of National Chairperson, she called Dr. Nduom nonsensical. She promised to cause the expulsion of Dr. Nduom at a meeting she had called for Tuesday November 29th. In the evening, Mr. Greenstreet continued the unprovoked attacks on Dr. Nduom promising to deal with him as the one “open sore” in the party!

Perhaps all of this was inevitable. Perhaps this is what is needed to have a truly independent CPP. Dr. Nduom is keeping his promise not to descend into the gutter with Samia and Greenstreet the only two out of nine elected members of the national executives who had seen it fit to go public with an internal CPP disagreement over when to elect presidential and parliamentary candidates. Interestingly, they the ones washing the dirty linen of the party in public have turned around to accuse others of bypassing the internal processes of that same party.

Dr. Nduom is on record as the founder of the Parliamentary Action Group, the one which way back in 2001 lobbied the CPP to focus attention on winning parliamentary seats. He was accused of not wanting to support the fielding of a presidential candidate. Today, Mr. Greenstreet who failed in his attempt to win a parliamentary seat in 2004 and quit running in a disingenuous manner tried to use that discredited and tired accusation to tag Dr. Nduom as a disruptive element in the CPP. He cannot mask the failure to sell an April or May 2012 congress to CPP executives by viciously attacking Dr. Nduom. Dr. Nduom will NOT join that insulting brigade.

We want to state that if wanting the CPP to be more serious about being a contender for BOTH parliamentary and presidential elections in 2012 makes Dr. Nduom an unwanted person in the CPP, then we want him to be proud to be different. If by supporting the CPP with 60 constituency offices, offering to sponsor 50 parliamentary candidates, and making available 50 motorcycles and 15 vehicles for the ten regions makes Dr. Nduom a cause for disunity in the CPP, then we ask him to stand firm proudly and be different from those who are bringing confusion into the CPP. If being an entrepreneur who has provided jobs to over 2,000 Ghanaians in Ghana is bad and makes him unworthy as a CPP member as Greenstreet said tonight on GBC radio, then want to tell Dr. Nduom with urgency, it is time to promote a NEW CPP that honours accomplishment, job creation, excellence, self-reliance and decency. We know our founder, Kwame Nkrumah would be proud of this African Personality who is striving for excellence.

If Samia Nkrumah and Ivor Greenstreet are looking to push Dr. Nduom out from the CPP on trumped up, false charges because they know any congress held today, tomorrow, December, May or November 2012 will elect him the CPP's Presidential Candidate, then we ask him, why bother? If that is the objective, then we say to Samia and Greenstreet, sack him NOW!

After the September 2011 congress, Dr. Nduom in congratulating the new executives wrote “… This Congress can lead to the building of a real, formidable Third Force in Ghanaian politics whose policis will make a positive difference in the lives of our people for years to come. For that to happen, delegates need to elect people who are prepared to work as a TEAM playing on the same side.

I will support the elected national executives to build a party that is different, forward-looking with people who are willing to work and make sacrifices and with a single purpose vision of making Ghanaians proud and prosperous in their own country. Ghana needs the CPP and we must all support the executives to unite our people and strengthen the Party. No one should be allowed to divide our ranks again.”

Yes no one, not Greenstreet, not Samia should be allowed to divide our ranks just because they are afraid of the popularity one man, Dr. Papa Kwesi Nduom. It is time for like-minded people to join together and bring something new, independent and different into 2012 politics to offer long-suffering Ghanaians the hope they need.