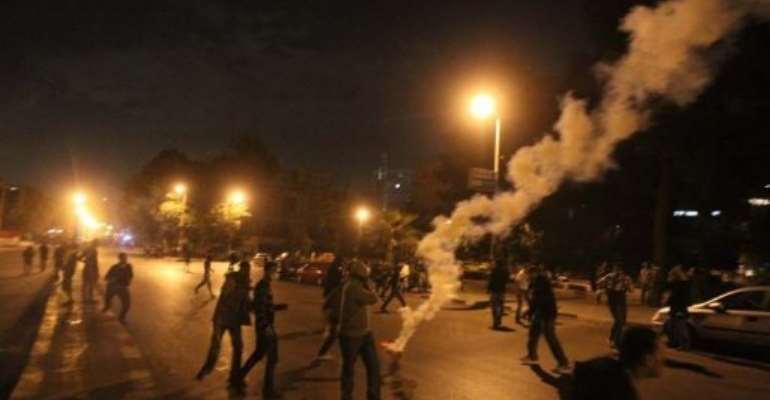 Police seized the square but were beaten back by protesters who triumphantly retook it. By Khaled Desouki (AFP)

CAIRO (AFP) - Two people were killed and hundreds injured in Egypt this weekend as police fired rubber bullets and tear gas at protesters in a violent countdown to the first elections since the ouster of Hosni Mubarak.

"Down with Tantawi," hundreds of demonstrators cried in Cairo's iconic Tahrir Square, referring to the post-Mubarak military ruler Field Marshal Hussein Tantawi, as they lobbed rocks and other objects towards armed police.

Medics announced the deaths of Ahmed Mahmoud, 23, who sustained a bullet wound to the chest in Cairo, and Baha Eddin Mohamed Hussein, 25, hit by a rubber bullet in Alexandria as the protests spread from the capital.

The clashes began Saturday in Tahrir Square, as police fired tear gas as well as rubber bullets to break up a lengthy sit-in organised by some of the driving forces behind the Arab Spring revolt that ousted Mubarak in February.

The sit-in was joined by some of the tens of thousands of protesters who had flooded the square on Friday to demand a quick transition to civilian rule and an end to Tantawi's military council, which replaced the Mubarak regime.

Police had seized the square, only to be beaten back by protesters who triumphantly retook it on Saturday evening chanting "The people want to topple the field marshal", Tantawi.

"They beat us harshly, they didn't care for either men or women. The interior ministry must take responsibility. We have one demand, the military council must go," said the 32-year-old accountancy professor.

"We didn't have a revolution so the people we removed could come back to parliament," said 30-year-old activist Ahmed Abol Enein.

"None of the revolution's demands have been met," he added.

"We need a transfer of power to civilians. Everything that is happening shows the military wants to stay in power."

The military, in charge since Mubarak's resignation on February 11, says it will hand over power after a presidential election, which has yet to be scheduled.

Parliamentary polls are to start on November 28.

The health ministry said that about 750 people were wounded in the clashes in Tahrir Square, epicentre of the 18 days of protests that ousted Mubarak, as demonstrations spread to Alexandria, Aswan and Suez.

The interior ministry said 40 police officers were among the injured this weekend.

A policeman on an armoured car shot rubber bullets into the Tahrir Square crowd, striking an AFP journalist in the forehead and shoulder, and a Western photographer in the face.

Organisers of the sit-in have called for speedy trials of policemen and officials accused of involvement in the deadly crackdown that accompanied Mubarak's abortive bid to retain his grasp on power.

Mubarak is on trial along with his former interior minister and security chiefs on charges of ordering the killings of some of the roughly 850 people who died in the uprising.

In Cairo, sporadic clashes persisted into the night near the interior ministry and parliament, an AFP correspondent reported.

"We will never be scared again. They can shoot at us all they want," protester Nasma Abdel Azim said.

Volleys of hissing tear-gas canisters landed among protesters close to parliament, on the south side of Tahrir as protesters skirmished with riot police.

Men on motorcycles and a three-wheeled car ferried the wounded to a makeshift clinic in the square, where protesters wounded by rubber bullets were bandaged.

Protests also took place in other cities including Aswan in the south, Alexandria and Suez on the Red Sea, where 10 people including seven demonstrators were injured, a security official said.