After All The Nonsense By Kwesi Pratt, What Is His Own Concept? 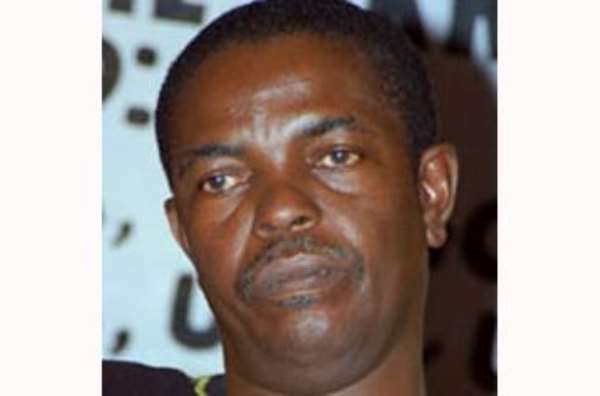 Kwesi Pratt to NPP: Troops are sent for war, not to dance "Tango", to go and dance "Abele".

Proceeding to set the records straight, Kwesi Pratt said the impression has been created that President J.E.A. Mills is betraying the so-called international community, but facts on the ground increasingly suggest that the position of the president and Ghana are too mild, relative to the positions other heads of state and organizations have taken. WHY IS THERE ANY IMPRESSION THAT MILLS IS BETRAYING THE INTERNATIONAL COMMUNITY? SIMPLY BECAUSE MILLS IS INDIRECTLY SUPPORTING THE POWER DRANK GBAGBO.

Pratt: Quoting from what he said was a statement issued by Angolan President Eduardo dos Santos, “a key member of the African Union” when he met the diplomatic community in Angola, Kwesi Pratt said President Jose Eduardo dos Santos objected to the use of military intervention as a solution to crises such as the Ivorian situation, because, among other reasons, it ignores “the rules of international and domestic law and sometimes the very evidence presented by the facts.” HOW MANY TIMES MUST DELEGATES SPEAK WITH GBAGBO AND FOR HOW LONG MUST WE WAIT FOR PEOPLE TO DIE IN IVORY COAST?

(WHERE ARE YOUR OWN FACTS OR CONCEPTS IN THE FOLLOWING NONSENSE, KWESI PRATT, ARE YOU A MESSENGER OR A JOURNALIST?)

1. The president of the Electoral Commission released the results of the second round of the presidential election, when it was out of his competence to do so, since his time, for purposes defined by law, was expired and since the issue had been transferred to the Constitutional Council for due consideration and treatment.

2. The United Nations representative in Côte d'Ivoire in a hastened move, certified and announced those results when the relevant UN resolution states that certification should focus on election results validated by the Constitutional Council, which had not yet made a pronouncement.

3. The declaration by the United Nations representative misled the whole international community since the Constitutional Council had not validated the provisional results released by the president of the Electoral Commission as a result of having accepted objections and complaints of serious irregularities and fraud which undermined these results.

4. The Constitutional Council is in fact the only organ with the legal competence to validate and publish the final results of the elections.

5. Under the law, The Constitutional Council should recommend the holding of new elections within 45 days, but it did not proceed in this manner and instead reported results that attributed the victory to another candidate.

Pratt; Considering the above facts, it is difficult for Angola to accept that there is an elected president in La Cote d'Ivoire. NONSENSE!! , IS ANGOLA OWING THE AFRICAN CONTINENT OR THEY OWN IVORY COAST?

Pratt: We believe however, that there is a constitutional president, the current president of the republic, who happens to be Laurent Gbagbo, who must remain in power until the new election as established by the electoral law of that country. The greatest difficulty now is that the 45 days are not enough to create a favourable climate for elections, and the current crisis complicates the matter further. IF YOU BELIEVE THAT THERE IS A CONSTITUTIONAL PRESIDENT, WHAT IS THE SENSE IN YOUR USELESS STATEMENT ABOUT THE NPP?

"We are therefore of the opinion that any military intervention in the particular case of Côte d'Ivoire would have an adverse effect, with serious consequences beyond its borders.” WHO IS TALKING ABOUT WAR? MILITARY INTERVENTION DOES NOT NECESSARILY MEAN WAR, IT CAN BE PEACE KEEPING OR PROTECTION FOR THE CITIZENS.
"PRATT! YOU DON'T HAVE TO BE DRAWING THE DEVIL ON THE WALL"

Pratt said the Angolan president rather recommended dialogue, skilful negotiations and political will in addressing problems on the continent using the institutions of the AU for solutions that would benefit the people of Cote d'Ivoire rather than solutions imposed from outside. OH YES! BUT FOR HOW LONG? 1,2,3 YEARS?

Pratt: "My brother, this is a joke. Is anybody telling me that the UN, ECOWAS, AU or any international organization can amend the constitution of a country without reference to the people of that country? Does it make sense? And yet we are pushing this position. THE ONLY ONE JOKING HERE IS KWESI PRATT! NO BODY IS PUSHING ANYTHING TO ANY POSITION, WE ARE SAYING GBAGBO MUST GO, BECAUSE THE PEOPLE OF IVORY COAST HAVE DEMOCRATICALLY ELECTED A NEW PRESIDENT WHO IS OF COURSE QUATTARA AND NOT GBAGBO. THE POWER DRANK EX-PRESIDENT MUST CLEAR OFF.

Kwesi Pratt stressed that any war to install Ouattara as president can only be “reckless” and “irresponsible” saying if he were a soldier in any of the countries contributing men and resources, he would rebel because the order to wage war in Cote d'Ivoire would amount to signing one's death warrant, a “suicide mission.” SHOULD IT THEREFORE BE LEFT AS IT IS FOR THE PEOPLE OF IVORY COAST TO SUFFER AND DIE?

IN MY OPINION KWESI PRATT AS USUAL IS ON "HIS USUAL HYPOCRITE AND SELFISH ROUTE", kicking left and right in the empty air only to serve his selfish interest. MONEY! MONEY! MONEY!

After all the big empty talk show this guy (Pratt) is making in Ghana, he has not been able to single out any reasonable concept which can be of help in dealing or tackling the problems in Ivory Coast. This makes it clear to me that Pratt is nothing but a selfish hypocrite only trying to paint the NPP black and polish the NDC for money.

More Feature Article
Modern Ghana Links
Dissolution of marriage over witchcraft and customary court: Media hype and extortion in Ibadan
Our ‘Whom you know’ Canker
A precedent lesson for NDC MP for Assin North Constituency
Why, when and how does Almighty God Backtrack on His Good Promise made to an Individual?
Immortal Wins: India Defeats Fortress Australia
Gov't must reject the attempt by IPPs to manage ECG
Open Letter to President of Ghana Nana Akufo-Addo
Precursor To Pentecost And The Coming Of The Holy Spirit
Memo to the Electoral Commission (EC)
Election Reports Quotes Dossiers
TOP STORIES