NDC can't be destroyed, it represents the people's conscience -Rawlings 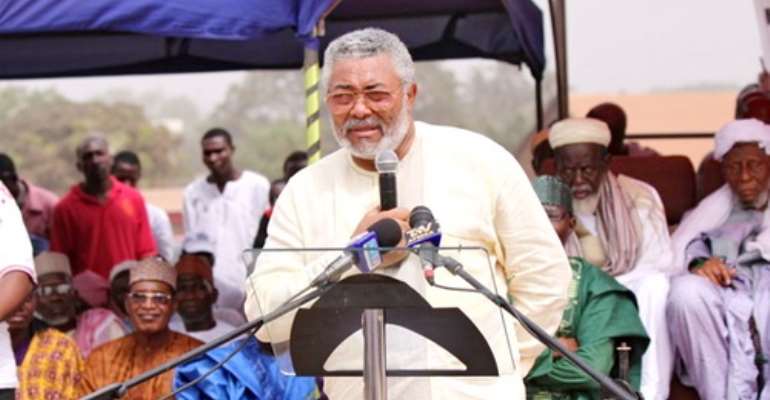 
Former President Jerry John Rawlings on Saturday said it is not possible to destroy the National Democratic Congress (NDC) because the party represents the conscience of the people.

President Rawlings said: “We should not forget how and why we won the elections, why we stayed in power for 18 years. It was because of our faith and belief in the truth, in justice and in fair play.

The former President who was speaking at a fundraising ceremony to mark the first anniversary celebrations of the Concerned Muslim Youth of Ghana at the Kanda National Mosque Project premises, said there was a time when he used to pass on his criticisms through appropriate channels on the quiet, “but the way some of these mistakes were continued, it was as if some of them were quite deliberate or meant to destroy the NDC. But it is not possible to destroy the NDC.”

Ex-President Rawlings said though the NPP invested huge amounts of money in the last election the NDC beat them with virtually nothing because “of our belief in noble and human centred values. Let us not make the mistake of forgetting those values. If we do so we will be doing so at great cost.”

The former president said the only way the NDC can correct some of the misdeeds of the NPP regime is to “rehabilitate our own selves. We must clean up our own act within the NDC party. Then and only then will we have the strength and moral fibre to correct the misdeeds that Kufuor left behind.

If we do not clean up what he (Kufuor) left behind, I am afraid things will not be that healthy for us in this country,” Rawlings said.