Who will you save your money with, Mills or Nana Addo? 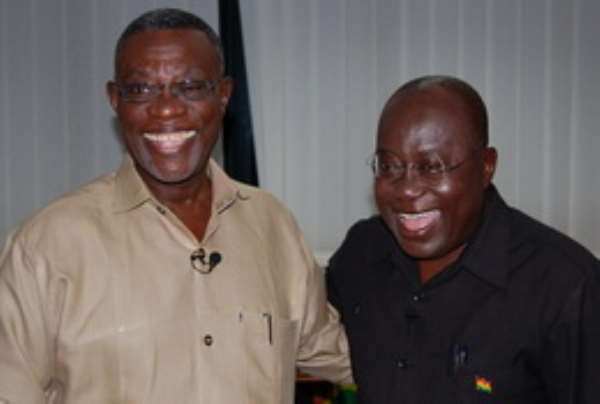 The Chief Executive Officer of the Ghana Free Zones Board and a member of the National Democratic Congress, Kwadwo Twum Boafo, has questioned the right of members of the New Patriotic Party to flaunt any moral compass he thinks they do not have.

After cataloguing a litany of aberrations he says the NPP, while in government, failed to take responsibility for, he said it is highly hypocritical for Ghana's biggest opposition to demand same of the Mills administration.

Kwadwo Twum Boafo who was speaking on Radio Gold's Alhaji and Alhaji programme on Saturday, was reacting to comments by Samuel Abu Jinapor, spokesperson for Nana Akufo-Addo, to the effect that the NDC government was too defensive of criticisms rather them admit responsibility for its failings and fix the challenges. He cited the case of US President Barack Obama who accepted responsibility for his government's dismal showing at mid-term electionsthat saw Democrats lose some 60 seats to cede control of the House of Representatives to the Republicans. The Democrats clung on to the Senate despite losing seats.

But turning to the “armed robbery and mass rape” story told by Amina Mohammed, Kwadwo Twum Boafo said it is a creation of the NPP who need a pillar to stand on for the 2012 elections but it will prove elusive because “the National Democratic Congress has decided that they are not going to take it lying down any more.”

He said the objective of the NPP was to create a sense of insecurity in the country and for which they have a rich history, but that agenda, he promised, with not succeed.

According to Twum Boafo, even on the score of security, Ghanaians will repose more confidence in President Mills than in Nana Akufo-Addo when it comes to choosing between the two.

“Let's just say that we want to ask concrete questions. I have a few concrete questions of my own to ask Ghanaians. As we speak today, if you have money that you wanted to take to the bank and your bank managers were Nana Addo and Atta-Mills, which of the banks will you take your money to knowing what we know now? If you have a pension and you wanted to put that pension safe and there was one insurance agency headed by Atta-Mills and one insurance agency headed by Nana Addo, which of them will you take your pension to? If you have children and you are travelling and you need to leave your children with somebody and the two options were Atta-Mills and Nana Addo, who will you leave your children with?...”

Kwadwo Twum Boafo said the NPP should admit that it had misfired on the issue of Amina and stop talking about her civil rights because no police would give bail to anyone whose surety they were not sure of.