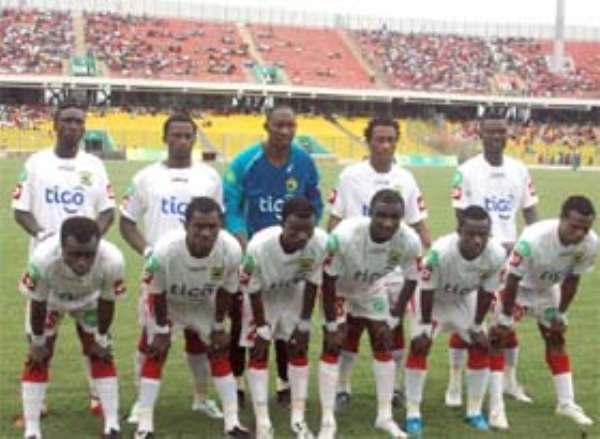 The important victory, which has given a lifeline to Kotoko's survival aspirations, didn't come on a silver platter, as the visitors gave the home team some trying moments, especially in the dying embers.

After taking the early lead, the Porcupine Warriors pinned their opponents to the wall, but try as they did, they could not add to the tally.

After the break, Liberty Professionals upped their game and made several incursions into Kotoko's vital area; but the solid Kotoko defence thwarted all their efforts.

At the Obuasi Len Clay Stadium, Goalkeeper Philemon McCarthy of Hearts of Oak produced a fantastic performance to keep on-fire strikers of New Edubiase at bay in a goalless drawn tie.

Both teams started the game on a flashy note as they threatened each other's goal area but luck eluded either side, as they missed begging chances at close range.

New Edubiase, with massive home support, looked dangerous whenever they entered Hearts' vital area; but goalkeeper Philemon McCarthy, in post for the Phobians, deflated all their efforts.

At the El-Wak Stadium, visiting Berekum Arsenal stunned Great Olympics 1-0 to push the home team into the relegation zone with five matches to end the season.

In the Kessben/Hasaacas duel at Abrankese, the home team made things very difficult for the relegation-bound visitors as they whipped them 2-0 with goals from Zigah and Lanqueye Addo.

League leaders Ashantigold's game with relegation-threatened Wise was supposed to kick-off late in the day at the Sekondi Sports Stadium at Takoradi, whilst the Aduana/King Faisal match has been postponed.