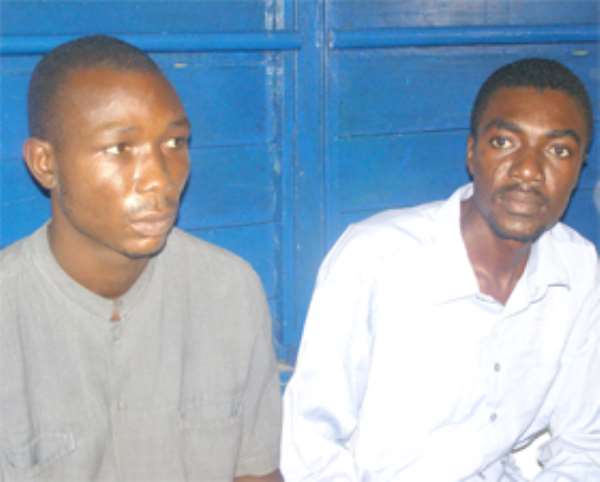 JOSEPH TETTEH, the 35-year-old mallam who allegedly murdered a popular businesswoman at Koforidua a fortnight ago, acted aggressively toward two journalists from DAILY GUIDE and DAILY GRAPHIC when they attempted to take photographs of him within the precincts of the District Magistrate Court 2 at Koforidua yesterday, after he was brought there on a provisional charge of murder.

Mallam Joseph Tetteh, who operates from Okorase, a village near Koforidua, charged on the reporters when they adamantly pursued him to get a shot, while he also tried in vain to avoid the cameras.

The accused rained invectives on the reporters before the prosecutors at the court intervened, asking him to properly position himself for his pictures to be taken since he is a suspected murderer.

After he had reluctantly allowed the journalists to take his pictures, his eyes were seen fixed to the ceiling of the court room as he murmured some incantations to himself.

Derek Ameyaw, 28, the landlord who was accused of committing the murder by the mallam, was however calm and willingly allowed for his pictures to be taken.

The counsel for the accused, Alfred Agyei-Mensah, who said he had just been introduced to the case, appeared in court to apply for the charge sheet to enable him study it.

He pleaded with the court to have his clients remanded in police custody to enable him have unrestrained access to them for any consultation, but the court, presided over by Her Worship Priscilla Yeboah, refused, saying the suspects should be remanded in prison custody.

The courtroom was filled to capacity by family members and friends of the deceased, popularly called Afia Ataa.

The facts of the case as presented in court by the prosecutor, Inspector Patrick Sackitey, are that Rita Baah, 30, who owns a shop at Koforidua, is a regular customer of mallam Tetteh who has been consulting him for spiritual assistance with her business and marriage prospects.

According to the prosecution, on November 14 Rita Baah visited the shrine of the mallam Tetteh at 8:00am for spiritual cleansing.

The prosecution said after Rita went to the shrine, mallam Tetteh killed her around 10am and left the body there till the early hours of Sunday, November 15 when he wrapped it in his bed sheet and put it on his motorbike (with registration number GN 8843 Z) with the intention of disposing of it at Mile 50, a suburb of Koforidua.

According to the prosecution, as mallam Tetteh was carrying the body of Rita on his motorbike around 12:50am, the chief of Ahwerase, Nana Asah Akoto II, who was travelling with two other friends from Akropong-Akwapim to Suhum at the time, spotted the mallam on his motorbike with the body.

When they realized it was a human body that the mallam was carrying, they accosted him and tried to arrest him but he managed to escape, leaving the body behind.

The prosecution explained that mallam Tetteh escaped to clean the traces of blood in his house, but with further alarm he was arrested by a group of people who nearly lynched him before handing him over to the police.

According to the prosecution, mallam Tetteh had wanted to send Rita's body to Osabene at Mile 50 where she lives with her boyfriend, Samuel Kwasi Asamani, to avoid being linked to the crime.

The police said when mallam Tetteh was arrested he admitted that Rita came to his shrine for spiritual consultation, but he denied killing her.

Rather, he said his landlord, Derek Ameyaw, and one Martin who were at home at the time of the murder were the ones who killed Rita because she had complained to him that the landlord had been harassing her about love.

The landlord has also completely denied knowing Rita as the prosecution indicated. The case has been adjourned to December 17.