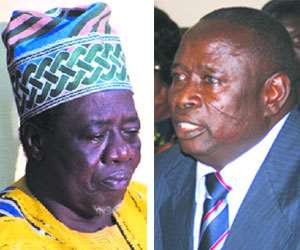 The leadership of the Lebupe Gate, one of the two chieftaincy divides in the Buipe Traditional Area of the Northern Region, has stated categorically that they could no longer succumb to what they perceive to be the tyrannical, repressive and the dictatorial rule of the Paramount Chief of the area, Buipewura Jinapor I, and are therefore ready to engage in any “bloody battle” anytime he tries their patience.

They emphasised that they would not hesitate to order their warriors and the youth to arm themselves in defence against what they described as the “frequent intimidation, harassment and unnecessary arrest” of their members by the Chief.

According to the embattled Lebupe Gate, the Buipewura Jinapor I, since his enskinment on June 13, 2008, had been using his position as a former Police Commander to order the police personnel in the area to arrest and intimidate their members without any justification.

At an emergency press conference in Buipe, the leadership of the Lebupe Gate, led by Gungunsu-wura Richard Kachanga Wumnaya and Dampowura Bawa, repeatedly said that they could no longer succumb to the tyrannical, repressive and the dictatorial rule of the Buipewura, and would therefore engage in a “bloody battle” with the chief and his members from the Denkeripe Gate, anytime they tried their patience.

The Lebupes, on the other hand, accused Mr. John Abdulai Jinapor, son of the Buipewura, of using his position as a Special Aide at the office of the Vice President, John Dramani Mahama, to support his father to further use the police personnel to traumatise their members.

According to them, the police, who were now fed up with the regular orders and interference of the chief, recently disobeyed his orders, when he insisted that the District Police Commander lock up nine members of the Lebupe Gate, who were forcibly arrested by the Buipewuara over a fight at the Buipe Market involving one of their members, and another member from the Denkeripe Gate.

They also accused Buipewura Jinapor of always carrying sophisticated guns in his vehicle, just to intimidate his opponents.

However, John Jinapor was alleged to have insulted the District Police Boss for refusing to carry out his father's orders, and therefore called for men from the Tamale Police Command, who also declined to his orders, because they already had men in the area.

Meanwhile, until last year, violent conflicts had been raging in the Buipe Traditional Area for over three years, after the death of the late Buipewura, as to which gate was the rightful occupant to the Buipe Skin, leading to loss of lives and burning of houses. The feuding Lebupe Gate, however, told the media that the current Buipewura was enskinned “illegally” by the Overlord of the Gonja Traditional Area, Yagbon-wura Bawa Doshie, and they would thus not recognise him as the Chief of Buipe. They are currently contesting the Buipewura at the Northern Region House of Chiefs for wrongful ascension to the Buipe Skin.

In an interview with The Chronicle, Buipewura Jinapor I strongly rubbished the claims by the Lebupe family that he was using the police to intimidate and arrest them. According to the Chief, he was legitimately enskinned by the Yagbonwura, after the same Lebupe Gate had contested him in court and at the House of Chiefs. But, he regretted that the opposing family members (Lebupes) were still not cooperating, and were doing all they could to make the area ungovernable.

He disclosed that he had reported 15 different cases against the Lebupe Family at the Buipe Police Station, including murder, attempted murder, assault, causing harm to property and illegal possession of fire arms, among others. Three of the suspects, he said, were currently in police custody.

The Buipewura asserted that he had on countless occasions accused the police in the area of shielding the members of the Lebupe Gate, saying, “The Buipe police fear the Lebupe family members, and cannot even go to Wuletu (where they perpetrate most of their violence) to arrest them, because they will also mobilise to attack the police.”

The Paramount Chief of Buipe, who insisted that he could not work with Central Gonja District Police Commander, ASP Edward Tettey Addo, appealed to the Inspector General of Police (IGP) to quickly replace him with a more efficient and competent person.

He concluded that he had worked as a law enforcing officer for over 38 years, and would therefore not do anything that would compromise the law and peace in the area. The Buipewura however confirmed that he posses a “licensed pump action gun” for his own protection, but denied ever using it to threaten his opponents. Meanwhile, the Central Gonja District Police Commander, ASP Edward Tettey Addo, in an interview with The Chronicle, refuted the allegation that the police had been assisting the Buipewura to intimidate or arrest members of the Lebupe Gate.

According to him, he was presently sitting on tenterhooks with the Buipewura, who was also accusing him of protecting the Lebupe Gate.

The Police Commander admitted that even though he received a call from Mr. John Abdulai Jinapor, Aide to the Vice President, he only tried to find out what was happening, and encouraged them to apply the law to deal with the situation. The District Chief Executive (DCE) for Buipe, Mr. Sualisu Issifu Be-Awuribe, when contacted, expressed grave worry over the raging feud between the two royal gates, and appealed to them to soften their stands, and also use the due processes to settle their differences, rather than resorting to arms or violence.

The DCE gave the assurance that the District Security Committee (DISEC) was on top of the situation, and would not countenance any person or group of persons who would disturb the peace in the area, or illegally possess arms.

Mr. Be-Awuribe revealed that Buipe was attracting serious international and national attention for investment opportunities, and thus appealed to the stakeholders to unite for the actualisation of the dream of turning the area into a first class commercial town in the north.

He also announced the government's readiness to get the youth engaged in gainful employment.

What Will The Publication Of 260-Page Cocoa Road Audit Repor...
5 minutes ago