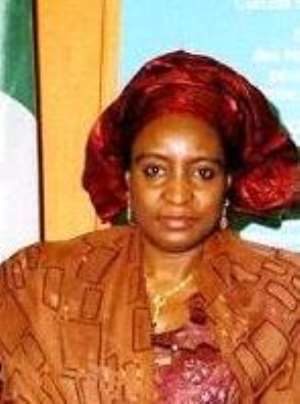 Ordinarily, it would be easy to laugh off eligible Nigerian bachelors as not having the 'liver'(and lever) to woo these delectable young brides before surrendering to 'recycled old cargoes'like Dakingari, Shinkafi and Yuguda. (Never mind that they are 'recycled'in gold). The truth of the matter, however, is that these three instances are symptomatic of deep sociological dislocation borne of social and economic iniquities.

The elite in northern Nigeria have created an artificial social circle made up of a narrow clique of extremely wealthy people. These people owe their wealth primarily to having held one public office or another. They own no factories, farms or any visible businesses. They contribute nothing to alleviate the abject poverty stifling the region's vast 'unwashed masses'.

The catch however, is that the social class they have created is essentially artificial and lacks the attributes needed for dynamism and growth. It can therefore only breed inwards. Because they have basically refused to educate the masses of people in the region, social mobility is at best, turgid. Integration is difficult. And since the elite represent only a tiny proportion of the region's people, they have fewer and fewer marriage partners to choose from. This, in part explains why some of the most desirable brides in Nigeria have ended up second and third wives. They have to remain in the circle.

Polygamy is part and parcel of our culture. Its merits and demerits is not the focus of this piece. It can be argued that none of the marriages described was forced or contrived. But one is forced to ask; where are the dashing well-groomed and well educated bachelors and young men who would normally be expected to woo these brides? In what setting did these governors meet their brides and at what cost to the public were these marriage knots tied? Indeed, what is happening to family and social life especially in the North?

In the Southern states, access to education has significantly leveraged class barriers and given people from working class backgrounds the opportunity to actualize their potentials and move up the social ladder. Conversely, the elite in the North have denied access to education and other opportunities to the vast majority of people in the region. They prefer to siphon monies meant for public schools to educate their children in the best schools in the UK, US and more recently, Malaysia, Cyprus, Ghana and South Africa. Mass ignorance means that they cannot be challenged.

This policy has created a cream of super-rich elite on one hand, and mountains of poor masses on the other. Like oil and water, they do not mix ? not in schools, not in offices and not in any social environment where young people meet and develop useful relationships. In which circumstance would a half literate cobbler meet the London educated daughter of a governor, minister or permanent secretary, and what would they have in common? Or in reverse, under what circumstances would the US educated, polo playing son of a senator or emir meet the illiterate daughter of a gateman when she is busy hawking kunun zaki to labourers? The social divide is better imagined.

The inevitable consequence has been the creation of two artificial social sets. Artificial because the wealth of the elite is almost always looted from the public treasury. Artificial because a fraction of that money would be enough to educate the poor and unleash their potentials. The irony is that the elite benefited from the honesty, dedication and foresight of others. The same schools and institutions that trained and nurtured them are the same they have systematically destroyed without any iota of guilt.

The repercussions of this artificial social divide are far-reaching. The growing problems of illiteracy, poverty and unemployment among the masses are a challenge to political stability and cohesion. This in turn is a threat to the status-quo, and a sign that the elite class may soon implode. Already, the signs are visible: having created a band of narrow elite with little chance for social integration, is it any surprise that they are running into difficulties finding potential suitors for their pretty daughters? Is it any surprise that many of these ladies, unable to find acceptable suitors, have taken to drug abuse?

The greatness and dynamism of America today is predicated on its acceptance of people from all corners of the world. It has trained and polished these people and given them the chance to excel. Ask President Obama. The elite in the north must view issues from this context. The solutions to these challenges do not require a celestial journey. It is right within easy reach: educate the masses and unleash their innate potentials.

Then perhaps, the son of the gateman that is viewed with disdain today may become the educated, well-groomed dashing knight in shining armour of tomorrow who may come to marry 'oga's daughter and rescue her from drug addiction. Even the shiniest and best cut diamonds were hewn from rough stones. That is the way of the world. The artificial social cliques the elite in the north have created will implode if it continues its present course. There is anger in the land.