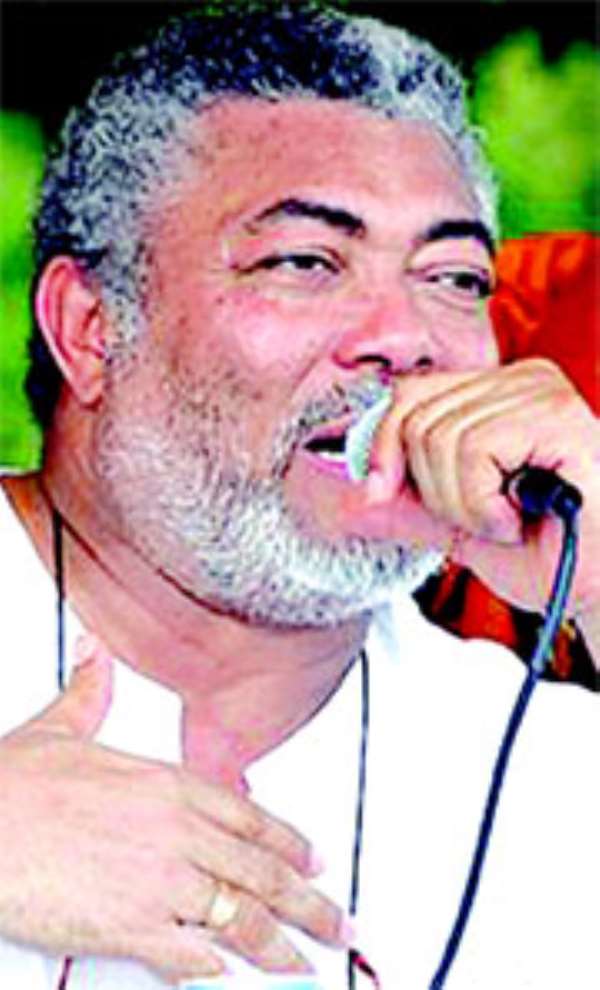 It has virtually become impossible for former President Rawlings to mount any political platform without launching vitriolic attacks on his political opponents, especially members of the erstwhile New Patriotic Party (NPP) government, led by former President John Agyekum Kufuor. When he recently got the opportunity to address a forum at the prestigious Oxford University in the United Kingdom, Mr. Rawlings accused the Kufuor administration of abusing the country's scanty resources.

In his opinion, “never before in our country's history has there been such blatant dissipation of national resources” as witnessed under President Kufuor and his NPP regime. He accused the NPP of having left a huge debt to the tune of GH¢ 47 billion on the government and people of Ghana, when the country's “combined debt from Independence was GH¢ 44 billion”, the former President said.

To him, the irony of the situation was that “there is absolutely no significant infrastructural development to show for it!”. Mr. Rawlings was speaking on the issue of 'Security and Democracy in Africa'.

Mr. Rawlings at his recent address at the Kwame Nkrumah University of Science and Technology (KNUST) in Kumasi, also did not spare the immediate past government when he was reported to have said “contrary to the assertion that their (NPP) tradition was truly democratic, the NPP government was an excellent example of an undemocratic regime”. To buttress his point, Mr. Rawlings stressed that under the NPP regime “once you belonged to the party you did no wrong. Every effort was made to obliterate the P/NDC legacy and the institutions of government were so politicized that even when they took decisions against government officials, such decisions were disregarded with impunity.”

Rawlings told his Oxford audience that Ghana under NPP sunk into a democracy of nepotism, non-accountability, power to the rich and a complete disregard for the feelings of the electorate. He believed that these and other reasons led to the NPP losing power in the 2008 general elections.

He described as very dangerous the allegations of abuse of the structures of the Security Services, the hounding and persecution of some security personnel, refusal to follow laid down promotion procedures and a complete politicisation of the military under the erstwhile administration.

“The NPP could not co-exist with Institutions which had integrity. The Security Services were not spared and the Judiciary also took a serious beating as well”, he stressed.

According to the ex-President, some of his colleagues were also aware of the deepening crises in the barracks. Mr Rawlings recounted that a ban was placed on respectable and senior security officers from visiting security and military installations.

Mr. Rawlings said despite all these efforts to muffle people's rights, Ghanaians did not hesitate to vote out the ruling party when it mattered most, despite the clear doctoring of figures that took place in a desperate bid to cling on to power.

“The NPP took us to the abyss as far as democracy was concerned, and such methods do not entrench our democracy. It allows for chaos, lack of confidence in the electoral process and political apathy”, he emphasized.

In spite of this, the former President said Ghana has managed to be stable because of the culture of tolerance that had been created between 1981 and 2000. According to him, these achievements have not come as a matter of the pressures imposed by the West, but “a desire by the people to prove that peoples' power is most sacrosanct.”

For this reason, he noted that “democracy is democracy so long as it is propped up by freedom and justice, probity and accountability”, stressing that “our problem is how to deal with the Western double standards,” he stated.