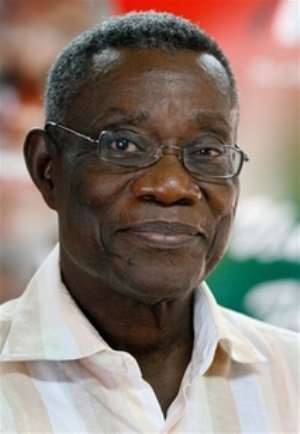 The Ghanaian public has for the past few days been debating the 100 days of President Mills. The President himself opened his arms to the media and answered a barrage of questions from media men. The President scored himself 8 out 10 during his encounter with the media. The President's assessment of himself and his claim that he has done very well has not gone done very well with a section of the Ghanaian populace. These critics think nothing has been achieved so far because their living conditions have not improved.

The opposition sees a picture contrary to that of the President. They have also raised a lot of issues with the President's 100 days performance. These concerns by the opposition and a section of the citizenry are very fundamental to the success of our democracy. The issue of insecurity, political harassment and intimidation, the falling value of the cedi to the dollar, the total disregard of rule of law, the high number of ministers appointed contrary to the promise of lean government during the campaign and a host of other allegations cannot be ignored by any government who wants to win the support of his country men and women.

The President during his 100 days carried out his promise of reducing taxes on fuel prices. This intervention was instantly eroded by the external effect of the increase in the world market price of crude oil. The appointment of 76 ministers and deputies with no special assistants and the scrapping of certain ministries clearly fit into the Presidents' agenda of cutting cost and profligate spending by his government. The promise of more women and the youth featuring in an Atta Mills government has largely been achieved. There has been an increase in the capitation grant and also the pledge to provide over 1.6 million school uniform to pupils in deprived communities. The President has been able to put a government in place by constituting his council of state, constituting the boards of some institution and the inauguration of the disability council during his 100 days in office. So far in the 100 days of his Presidency previous government officials are going about their duties freely, those who want to travel outside the country have not been hindered. Nobody has been invited to the BNI. Political opponents are expressing their views on how the country is being governed without any fear.

The opposition claims of insecurity, political harassment and victimisation, filth, the rise in the exchange rate of the dollar to the cedi, disregard for the rule of law etc cannot be swept under the carpet. After all they are also Ghanaians leaving in this country. The entrenchment of good governance and democracy in Ghana cannot be achieved without a formidable opposition; my beef however is about how a section of Ghanaians have chosen to criticize every move of the current administration. Some of the criticisms started from day one of this government's assumption of office.

For the past few months, the Ghana Police have mastered their art in crime prevention, although we receive reports of armed robbery or a criminal activity everyday, so do we receive reports of the police arresting criminals daily and putting out mechanisms to combat crime in the country. The statistic released by the police in the last three months has revealed that the crime rate has reduced as compared to last year, but let me hasten to add that there is more room for improvement. Let me also use this opportunity to commend the police for the wonderful work that they are doing to combat crime. The issue of sanitation needs not to be politicised. Yes the NDC administration promised of clearing filth in the country in 100 days and the government has done much in that sector, the challenge is with the attitude of the Ghanaian. Why do we have to wait for the government to clean our surroundings for us? Commonsense tells us that filthy surroundings results in diseases so why wait for a politician to clean your environment when that politician did not help you to litter the surroundings. Let's learn to be responsible for our actions.

The politicisation of issues bordering on the economy is not helping we the citizenry. The cedi started depreciating long before the Mills administration was voted into power. The issue should be handled in a holistic manner devoid of politics. Any government voted to steer the affairs of this country cannot run away from the current economic crisis. This crisis has been with us since the overthrow of the first President of Ghana. If the citizens invest in the economy and patronize goods produced by their kiths and kin, part of these economic challenges would be solved. We must believe in the Ghanaian industrialist and shun cheap and inferior goods from abroad. The government should also abide by its promise to support local industries to grow. The earlier we put our heads together to find solutions to our economic problems the better. Let's stop the blame game and seek ideas across the political divide. It is our country and nobody can make it better unless we the citizens.

The issue of political harassment and victimization is neither here nor there. I think the opposition is only crying wolf. There have been some few altercations here and there, but what has lead to that? The uncooperative nature in which the two transitional teams went about its duty was a factor, why should the NPP boycott the transitional teams' meeting if they have nothing to hide? Why should properties of the government be kept in an individual's house for over a year after the person has resigned from government? What was the motive? It was reported in the national dailies some time back that, two government cars were retrieved from the Presidential candidate of the NPP and former foreign affairs ministers' residence after he resigned his position over a year ago. This and other issues create suspicion and mistrust.

The Agbogboloshie and other violent incidence that happen after the election had their root cause before the election and because the NPP did not handle those issues well before the elections, these same issues is coming back to haunt them. Supporters of the NPP who committed crime when they were in power are released a few hours or days after they have been arrested. Political violence in all forms should be condemned. The NDC came out to condemn the violent acts committed by their party supporters and urged them to stretch a hand of friendship to their opponents from the other parties. President Mills during his inauguration promise to be a President for all and I hope the police would do their best to arrest and prosecute anybody who commits a crime no matter his / her political colouration. Ghana belongs to all of us and not supporters of the ruling government or the opposition.

The number two in command His Excellency John Dramani Mahama has been instrumental in the 100 days success of the presidency. The Vice Presidents' intervention in the case of the tomatoes growers is a clear case of a listening government who cares for the ordinary people. In the past, this issue of the tomatoes grower would only see a “big man” visiting the tomatoes growers speaking in highfalutin language which finally results in no action on their predicament. The idea of a Savannah Development Fund which seeks to develop the Northern parts of our country is one programme that all Ghanaians who have this country at heart should be happy about. The commitment shown by the Vice President on the implementation of this programe by the NDC government should send a strong signal to every Ghanaian that the NDC government means well.

No matter our political colouration, let us all help the Atta Mills government to succeed.

Congratulations President Mills on your 100 days in office. It is the prayer and hope of all Ghanaians to see you succeed.

Only Mahama Can Rescue Ghana From HIPC, Vote NDC To Restore ...
48 minutes ago