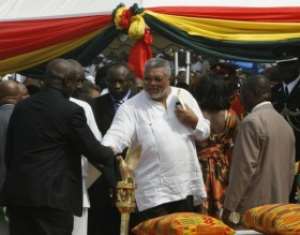 Today's search has uncovered how ministers and other officials of the first administration of the National Democratic Congress (NDC) under Flt. Lt. (Retd) Jerry John Rawlings-7th January, 1993-7th January, 2001, virtually looted vehicles that were impounded or confiscated by the Customs Excise and Preventive Service (CEPS). The cars were later put on auction sale.

And that offered fertile ground for grabs by the NDC Ministers and functionaries. Some of the cars were bought for as low as ¢500,000 (GH¢50) with the highest purchase being made by former NDC MP and current Labour Consultant, Hon. Austin Gamey, who bought his Subaru Legacy Salon Car for ¢9,000,000 (GH¢900).

Most of the cars were manufactured between 1997 and 2000. That offers an indication that most of the cars were brand new ones at the time that they were put on auction sale by the CEPS after the owners had failed to pay the requisite customs duties and penalties that were imposed after the expiration of date of removal.

The cars were then confiscated y to the State and put on auction as the law stipulates for acquisition by members of the general public. The brand of cars included Toyota, Toyota Land Cruiser, VW Passat, Subaru, Mitsubishie, Daewoo and Peugeot cars.

The list which contains the names of the 80 former Ministers and officials sighted by Today, indicates that the looting might have occurred during the second year term of the first year term of the NDC. Interestingly some of the officials hold key portfolios in the current administration of Prof. John Evans Atta Mills.

Hon. Ama Benyiwa-Doe is the Central Regional Minister; Hon. Samuel Ofosu Ampofo is the Eastern Regional Minister, Rojo Mettle Nunoo is a deputy Minister-designate, with Alhaji Mahama Iddrisu, serving as the chairman of the vetting of District Chief Executives.