Media Objectivity: a reality or a saying 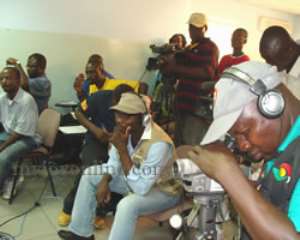 Every journalist who has gone through proper training might have heard the popular advice about media objectivity - the need to present two sides of a story truthfully.

It has been said many times that a good news report is one that gives chances to a balance sides such that the public becomes the judge as to what is right.

However, Mr Gabby Asare Okyere Darko, Director of the Danquah Institute thinks otherwise, he says, “I do not believe that there is anything called objectivity in journalism.”

As a developing country, the media need to focus on development journalism; Mr Asare Okyere Darko said but was quick to add that development journalism cannot be done in an objective way, there is certainly the need for the media to be subjective to patriotism, therefore the media is free to take a stance on issues, he said this when he gave a solidarity message at the launch of “The Patriot” newspaper.

Discussing the issue of media objectivity in the office, a colleague journalist shared his experience. He said: “I happened to cover an event where an organization was at a certain village to help those with eye related problems. I was so much passionate about the issue because my grandmother who looked after me was bedridden for many years, before she died, because of an eye problem and I still have not overcome my own eye problems.”

He continues “I was so passionate that I wished I could present a perfect picture to the world”. This is a journalist who is supposed to be objective but he said “I was tempted to put my own opinion in the story because I have suffered from such and wished things could change instantly by the power of the pen”.

Mr Paul Adu-Gyamfi Chairman of the National Media Commission has always stressed on the need to practice good journalism in Ghana since that is what the nation needs.

He says there are many decent Ghanaians who want decent information, decent entertainment and enlightening media content that helps them to reflect on the state of the nation.

Mr Adu-Gyamfi can therefore be comfortably described as an advocate of good journalism always lauding the practice of high quality journalism.

He debunks the saying that credible news does not sell as totally false and endorses good journalism as a high earner.

In an interview with him about the reality or otherwise on media objectivity he said: “It is totally wrong for people to say that if you don't bring outrageous headlines you cannot sell.”

His stance on media objectivity is straight forward calling on the media to be fair, honest and professional in their reports.

How then does the media become objective? Journalism training in Ghana does not make practitioners experts in any field. What happens in journalism in Ghana is that one learns more on the field than in the classroom.

Therefore most journalists in Ghana depend on information given them by their informants. A good example is the issue of the Economic Partnership Agreement which was discussed for months in the media, with the European Union on one side and the Trade Unions on the other.

Journalists covering these probably were not economic or trade experts but had to depend on information given them and use their discretion to decide which angle of the story they would use depending on how they understood the issue.

One journalist said we really need constant training on all subject matter to be able to write well and the interest here should not be the journalist but the public and the need and desire for them to know what is going on in the country.

One frustrating thing to this writer is the level of ignorance displayed by various sections of society about governance, finance, economy, trade, fuel pricing and other developmental issues which under normal circumstances should be discussed in the media instead of the petty politics, personal insults and others which does not add but rather subtract from Ghana's development efforts.

Another argument is that journalists themselves do not really know and understand these issues to enable them write objectively and present facts and figures as it should be.

What can be done to improve media objectivity and thus public participation in governance is a multimillion dollar question that needs a definite answer. For the answer, the general public, government, stakeholders in the media industry and may be everybody must find